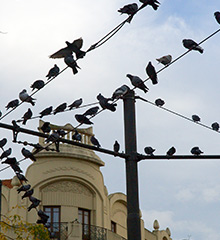 Most ecological theories are based on ecosystem structure and function in non-urban and less human impacted environments. As cities grow and the global population becomes more urban, ecologists need to test their theories in urban settings and to develop new theories that reflect the ecology of cities.

CAP scientists have used the special characteristics of urban food webs (i.e. trophic dynamics) to test long-standing ecological theories about organismal interactions, biodiversity, and the assembly of communities. In particular, diversity patterns of birds and some arthropods in urban ecosystems suggest that exotic and invasive species associated with human settlements (e.g. pigeons and grackles) often outcompete native species that could otherwise inhabit cities. In Phoenix, the diversity of plants is actually higher in the city compared with the surrounding Sonoran desert ecosystems because people have introduced many non-native species to create the desert “oasis city.”