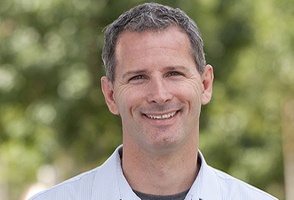 This year marked several significant milestones in leadership and administration for Decision Center for a Desert City (DCDC). In a planned transition phased in over the past year and a half, Dave White assumes the role of Principal Investigator and Director. Dave has been with DCDC since its inception; first as senior project personnel in DCDC I, then as co-PI and Associate Director for DCDC II.

Founding Director and PI Patricia Gober stepped down to assume a new position as Professor, Johnson Shoyama Graduate School of Public Policy, University of Saskatchewan. Gober, however, maintains a research faculty appointment with Arizona State University and continues to contribute to DCDC as senior project personnel.

Charles Redman, Founding Director of the School of Sustainability, continues his role as co-PI and co-Director, positions he has held since DCDC was established.

Dave White is Associate Professor of Community Resources and Development at Arizona State University. He is also co-director of the Decision Center for a Desert City (DCDC), Senior Sustainability Scientist with the Global Institute of Sustainability, and affiliate faculty with the Consortium for Science, Policy, and Outcomes.

His work focuses on understanding and enhancing the linkages between science and policy for environmental decision making. He has developed and studied processes, outcomes, and institutional forms of boundary organizations for the co-production of knowledge and decisions; identified divergent perspectives between stakeholder groups at the science-policy nexus; and tested competing methods for gathering information on sensitive topics from decision makers. This work has contributed to the development and refinement of new tools and techniques for collaborative environmental decision making such as the DCDC WaterSim model. White is the author of more than two dozen articles about the interactions of science and society published in journals including Science and Public Policy, Environmental Science and Policy, Environment and Behavior, and Society and Natural Resources. He is a recipient of the ASU President’s Medal for Social Embeddedness. White received his PhD in Forestry from Virginia Tech in 2002.

DCDC II is one of four National Science Foundation (NSF) funded programs studying Decision Making Under Uncertainty. The NSF is an independent federal agency that supports fundamental research and education across all fields of science and engineering. DCDC is a research center administered by the Global Institute of Sustainability.

For additional information about Decision Center for a Desert City, please read our most recent annual report to the National Science Foundation.