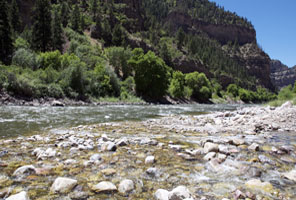 Thirty million people in the Southwest use the Colorado River's water for their material sustenance; millions more use the river itself for recreation and spiritual enjoyment. The river quenches our thirst, feeds our souls, and enlivens our senses.

We are not the only inhabitants using this river. Its waters and canyons provide a vibrant but deeply threatened ecosystem for untold numbers of plant and animal species. These competing demands make the Colorado River one of the most contested and controlled rivers on Earth. Over the last decade, humans have drained all of the river's water - all 5 trillion gallons - before it reaches the Sea of Cortez.

States in the Western U.S., and particularly in the Colorado River Basin, will face an unprecedented water supply crisis in the coming decades. Extended drought, climate change, and increasing population have created competition for water supplies. Water scarcity is further compounded by declining availability of fresh water in aquifers across the West based on historic use.