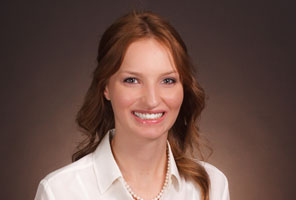 Emily Allen, a two-time intern in DCDC's Internship for Science-Practice Integration (ISPI) program, has won the Udall Scholarship for commitment to the environment.

Throughout his decades-long career of representing Arizona, Udall – a lawyer and environmentalist- worked on legislation to expand the national park system, protect the environment and effectively manage natural resources. He also was a driving force for legislation, called the Central Arizona Project (CAP), which brought Colorado River water to the parched Arizona desert.

While Udall supported the project, which routed river water through Arizona and into Phoenix and Tucson, he was concerned about its environmental impact. This dilemma became a significant challenge of Udall’s work on the CAP.

Allen, a sustainability and English major and student in Barrett, The Honors College, has been named a 2013 Udall Scholar by the Morris K. Udall and Stewart L. Udall Foundation. She will receive a $5,000 scholarship to use toward tuition for her senior year at Arizona State University.

She was among 488 candidates nominated by 230 colleges and universities. Fifty recipients from 43 colleges and universities were chosen for this year’s scholarship. Udall Scholars are selected on the basis of commitment to careers in the environment, Native American health care or tribal public policy; leadership potential; academic achievement; and record of public service.

"My career goal is to work with local governments in the state of Arizona to protect fragile water resources from the pressures of overuse and rapid urban development. I plan to accomplish this goal as an attorney with a water law specialty, either in a private firm or a local municipality," Allen stated on her scholarship application.

"I will learn from Morris Udall’s challenge in office and defend water resources against unreasonable urban uses. I will be the additional support that city officials need to protect and property manage water resources," she added.

Allen said she is honored and humbled to have won the scholarship.

"It is an incredible honor to have the opportunity to engage further with the Udall Foundation and to be able to learn more about environmental leadership through their network," she said.

"I also feel humbled because so many people helped me to earn this award. My application was based on my experience with the School of Sustainability, the Barrett Honors College, and the Decision Center for a Desert City. The exceptional mentorship available to me through those three entities not only helped me to develop my credentials for the scholarship, but they also provided me with critical support in the scholarship application process," she added.

Emily's work in DCDC's ISPI program has included working in 2011 at the City of Mesa with mentor Mark Holmes, P.G. on Uncovering Barriers and Motivations in Groundwater Management Collaboration and GIS-Based Delineation of Prime Groundwater Recharge Areas in the East Salt River Sub-basin and her current internship with the City of Phoenix working with mentor Doug Frost.

Allen will attend a conference of Udall Scholars August 7-11 in Tucson where they will receive their awards and meet policymakers and community leaders in environmental fields, tribal health care, and governance.