Decision Center for a Desert City at AAAS 2013 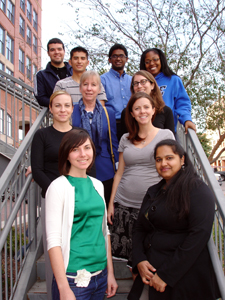 A contingent of faculty, graduate students and undergraduate students from the Decision Center for a Desert City (DCDC) at Arizona State University will present their research at a special poster session at the American Association for the Advancement of Science (AAAS) Annual Meeting in Boston, MA on February 17. Dave White, DCDC’s Director and Principal Investigator and Margaret Nelson, DCDC Co-PI and education program coordinator, will accompany the group.

Students from DCDC Community of Graduate Scholars (CGS) have organized a special section for the AAAS general poster session focused on decision making under uncertainty (DMUU) since 2011. The ASU students coordinated with students and faculty from universities that host projects funded by the National Science Foundation under the NSF’s DMUU program, which, along with ASU, includes Columbia University, Carnegie Mellon University and University of Chicago. The DCDC students and their faculty mentors will present research that employs interdisciplinary social science methods to develop knowledge and tools for water sustainability and climate change adaptation in urban areas. Two undergraduate students funded under DCDC's Research Experience for Undergraduates (REU) program will also attend.

According to Margaret Nelson, an anthropologist and Vice Dean of Barrett, The Honors College, "The students in the Community of Graduate Scholars represent multiple disciplines, including psychology, anthropology, public policy, sustainability, computer science and geography. Through the seminar, students become familiar with the issues, perspectives, and language of the researchers within DCDC, as well as with issues that emerge from interdisciplinary collaborations."

"The CGS students have not only been instrumental in developing interdisciplinary collaborations at ASU, but have fostered cooperation between the DMUU centers," says White, a Senior Sustainability Scientist at ASU’s Global Institute of Sustainability. "Their efforts have helped develop a network of research efforts focused on improving environmental decision making."

Research posters will be presented by the following students:

The AAAS is an international non-profit organization dedicated to advancing science around the world by serving as an educator, leader, spokesperson and professional association.

The Decision Center for a Desert City (DCDC) at Arizona State University (ASU) was established in 2004 by the National Science Foundation (NSF) to advance scientific understanding of environmental decision making under conditions of uncertainty.