Listen to DCDC director, Dave White, discuss the regional impact of the drop in Lake Mead's water level in his interview with KJZZ's Here and Now. 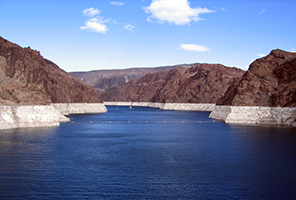 BOULDER CITY, Nev. – Lake Mead, the reservoir created by Hoover Dam, is anticipated this week to reach its lowest water level since the lake’s initial filling in the 1930s. The Bureau of Reclamation’s Boulder Canyon Operations Office is projecting the elevation to drop to 1,081.75 feet above sea level during the week of July 7 and to continue to drop, reaching approximately 1,080 feet in November of this year.

"We will meet our water orders this year and we are not projecting a shortage condition in 2015," said Lower Colorado Regional Director Terry Fulp. "We continue to closely monitor the projections of declining lake levels and are working with stakeholders throughout the Lower Basin to keep as much water in Lake Mead as we can through various storage and conservation efforts."

Annual releases from Lake Powell and Lake Mead are determined in accordance with the 2007 Colorado River Interim Guidelines for Lower Basin Shortages and Coordinated Operations for Lake Powell and Lake Mead (Guidelines). Only if Lake Mead is projected to reach elevation 1,075 feet on January 1 of each year would the Secretary of the Interior determine a shortage condition and reduce water deliveries in the Lower Basin.

Lake Mead’s elevation is currently projected to be at approximately 1,083 feet on January 1, 2015.