Land cover modification scenarios and their effects on daytime heating in the inner core residential neighborhoods of Phoenix, AZ, USA

This study addresses simulations of summertime atmospheric heating/cooling and water use at the local scale in Phoenix, Arizona – a city in the arid Southwestern United States. Our goal is to consider various climate effects by the manipulation of land coverage within census tracts at the local scale. This scale refers to horizontal areas of approximately 102–104 m on a side and to measurement heights in the inertial sublayer above the urban canopy and its roughness sublayer. The model we use for this scale is the Local Scale Urban Meteorological Parameterization Scheme (LUMPS) after Grimmond and Oke, 2002. We calculate different scenarios using the LUMPS model to determine the interplay of water use and summer diurnal variations of atmospheric heating and cooling processes for selected census tracts in Phoenix. First, we simulate xeriscaping within the census tract neighborhoods by transforming green spaces into soil. The second scenario simulates an infill and Brownfield development scenario, increasing density and impervious surfaces while at the same time decreasing soil. Third, we reduce barren soil and impervious surface areas to simulate a green city. With LUMPS we can understand the optimization of water use and at the same time the maximization of the cooling potential within the local scale area as a whole, dependent on varying the total surface cover fractions. In urban planning, LUMPS can be used as scenario based tool to design pedestrian-friendly sustainable development in desert climates where land coverage is tailored to reduce UHI effects and to induce more comfortable daytime temperatures.

Our scenario-based local-scale model approach can assist planners in making better-informed decisions on UHI mitigation strategies. The results of the scenario-based model runs indicate which urban design is best for a particular location – a challenging decision, especially in desert cities like Phoenix where water supply is crucial for a sustainable future. These findings could be used as a basis for specific policy approaches to UHI management. In 2006, the Downtown Phoenix Urban Form Project was started to shape future growth and create a more integrated, pedestrian oriented, and sustainable downtown through form-based codes (City of Phoenix, 2008). The regulating plan developed by the Urban Form Project suggests urban design principles to mitigate the UHI effect and to create a more comfortable and sustainable downtown environment. The proposed strategies are based on urban form principles regarding street and building proportion, open space, vegetation, building design, and building materials. One of the measures is the "connected oasis", a plan connecting existing and new public spaces through a green street network. 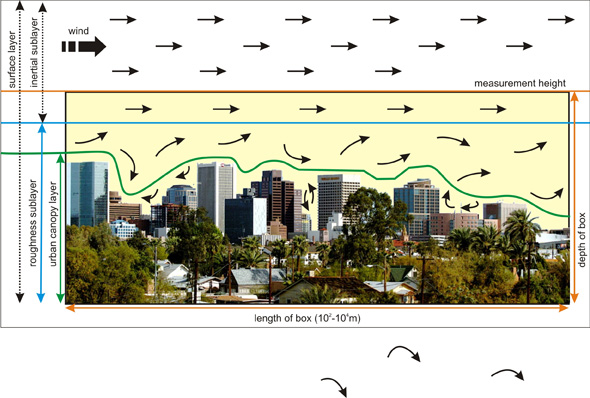 Our modeling approach complements the Urban Form Project by quantifying the optimal vegetative coverage to mitigate UHI effects and create a more comfortable pedestrian-friendly environment. Although our results may suggest recommendations for land coverage within neighborhoods to minimize water use and heating, the model cannot specify the spatial arrangement of land cover fractions. To determine the urban design within neighborhoods more precisely, a micro-scale model would have to be employed. Another application of our scenario-based model results are Climate Action Plans, a policy tool urban planners use to minimize heating. As of 2009, over 141 local jurisdictions and states have already developed Climate Action Plans to mitigate and adapt to global climate change by reducing greenhouse gas emissions and preparing for possible climate change threats and risks.

Increasingly, Climate Action Plans do not only focus on greenhouse gas emissions, but also address adaptation measurements such as UHI maps, green urban design, and water conservation. Future research may include the development of additional mitigation scenarios such as changing the mean albedo of the land cover fractions or the albedo of individual surfaces such as roof tops and impervious surfaces. To refine the densification scenario, the manipulation of average building heights would be beneficial. We also envision a greater number of variables for land cover fractions, e.g., pervious pavements, and leaf indices for trees and plants native to the Sonoran Desert. To enhance the application of the model, the integration of the model into a geographical information system (GIS) would allow for the correlation of spatial analyses of temperature variations with other relevant geodata.