How could we transform the urban form?

In this future, urban form is configured around three distinct types of centralized hubs: dense urban cores, medium density garden hubs, and large-scale agriculture and energy production hubs. The design of this future desert city is intended to concentrate land uses based on urban needs while facilitating high connectivity of people and goods between and among hubs using alternative transportation.

Iconic changes in this future include simultaneous developments in the three major hubs: increases in urban density, establishment of peri-urban and urban agriculture, and investments in large-scale renewable energy farms. By 2060, all hubs are established and connected by rail and trail networks and desert restoration in previously developed areas is underway. 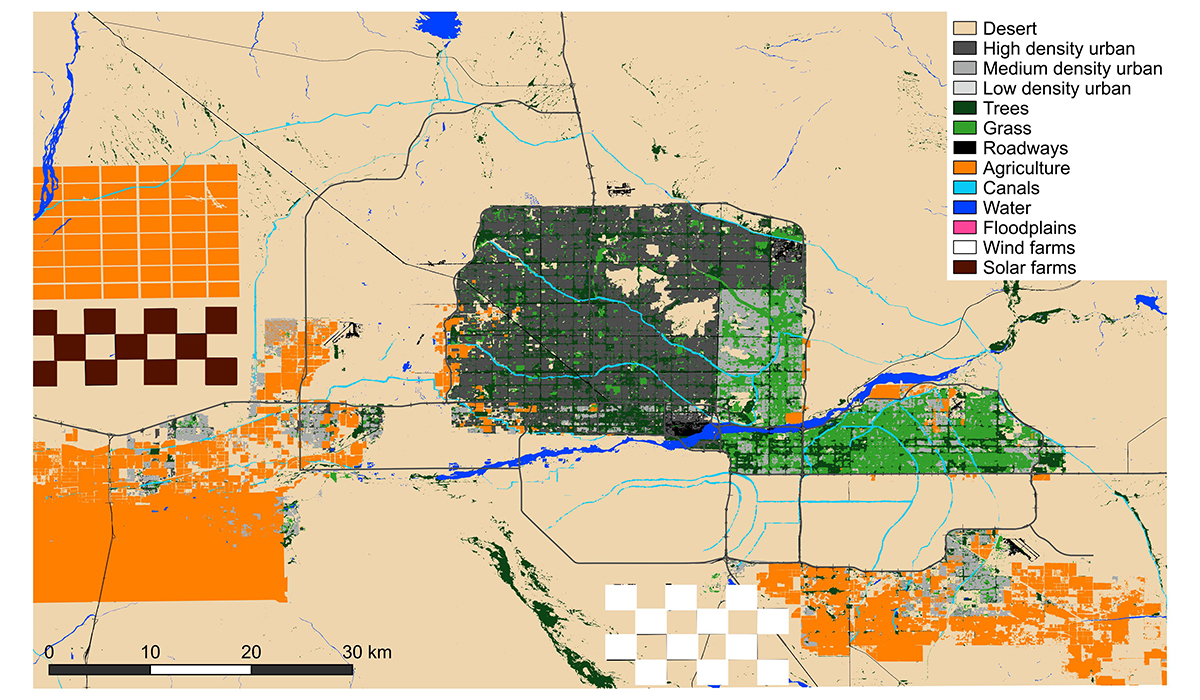 Agriculture hubs on the periphery of the urban core support food production for the regional population and are connected to the urban core by light rail, which replaced the existing freeway system; no personal cars exist in this future. While there is little open space within the boundaries of the dense urban hub, open space is accessible via rails or trails on the periphery of the urban cores. Overall urban extent has been greatly reduced with much of it being converted to native desert, new agriculture, and/or solar and wind energy production hubs. 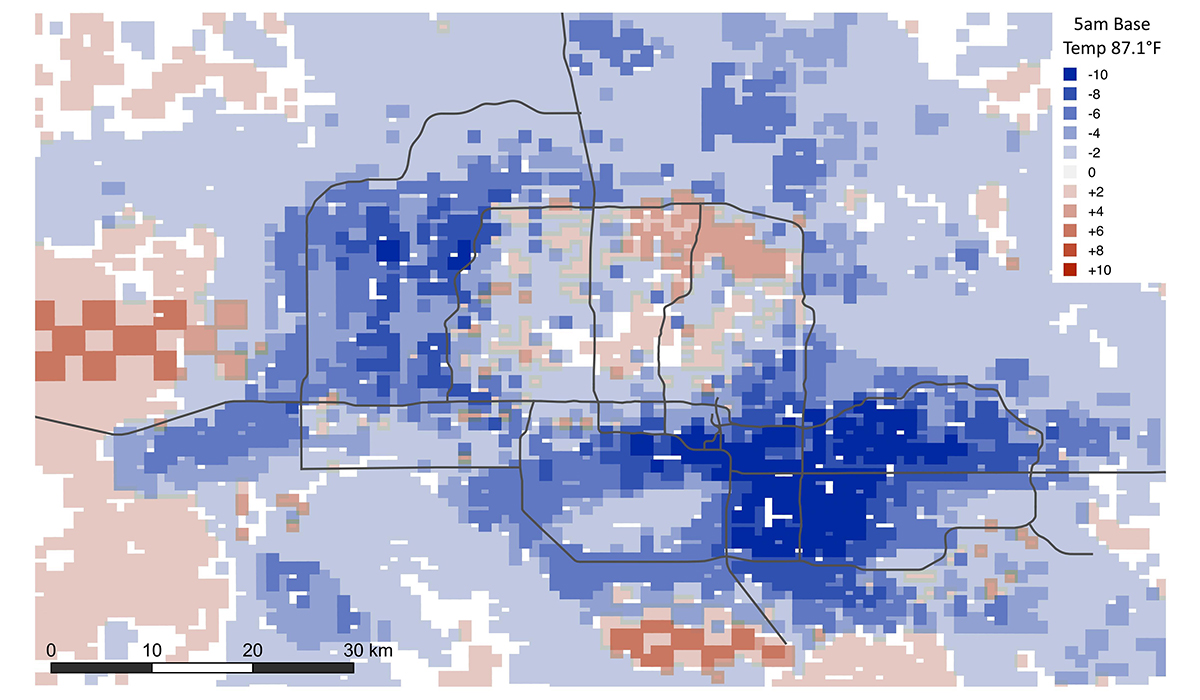 This future has cooler temperatures on the periphery of the city due to (a) reversion of urban to desert west of dense urban hub, (b) no new urban development south of the urban hub, and (c) green infrastructure in the eastern garden hub. However, the high density urban core reveals higher temperatures due to the concentration of heat retaining materials such as roads, buildings, etc. 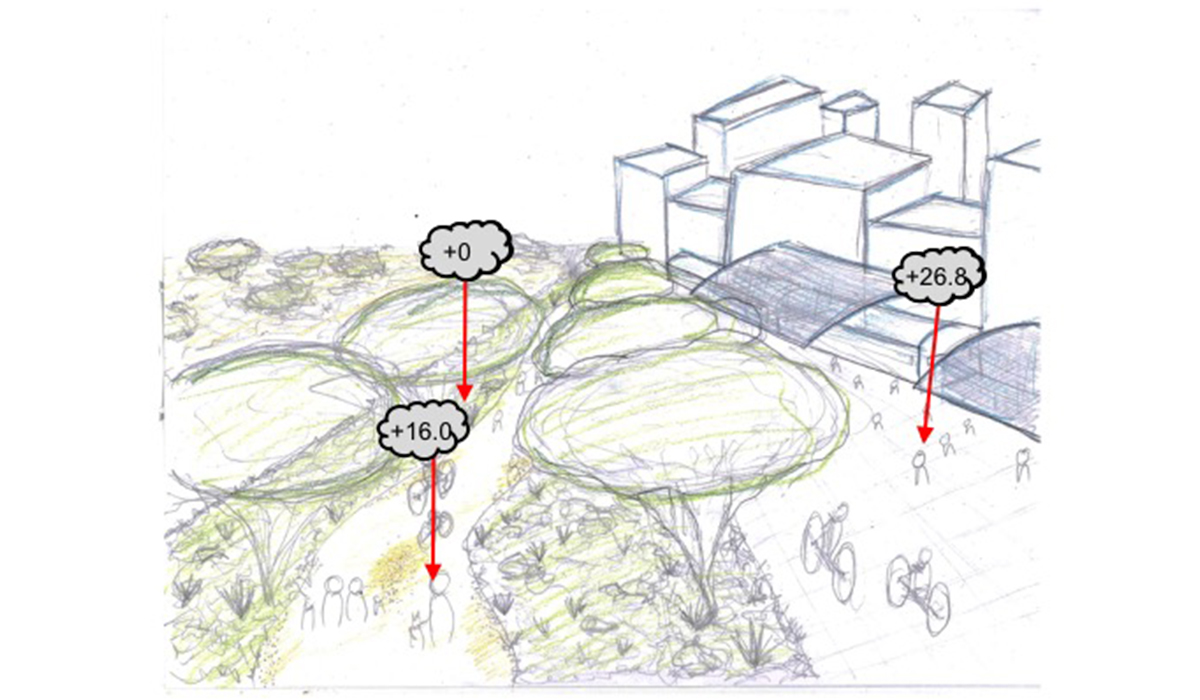 The base temperature in this rendering is 113.1°F. Temperatures vary depending on level of shading and proximity to heat retaining materials (e.g., asphalt). Here the stark boundary between the hubs is emphasized. In 2060, the freeway has been converted to an alternative transit corridor with light rail transporting passengers and cargo to other hubs. The walking and cycling paths connect urban dwellers to the city’s extensive open space network that is rich with vegetation and wildlife providing cooling and recreation amenities. Similarly, within the city boundaries many of the non-freeway streets have been converted to trails, paths, and/or rail lines to connect pedestrians to a variety of destinations fulfilling their goal of a 20-minute city. 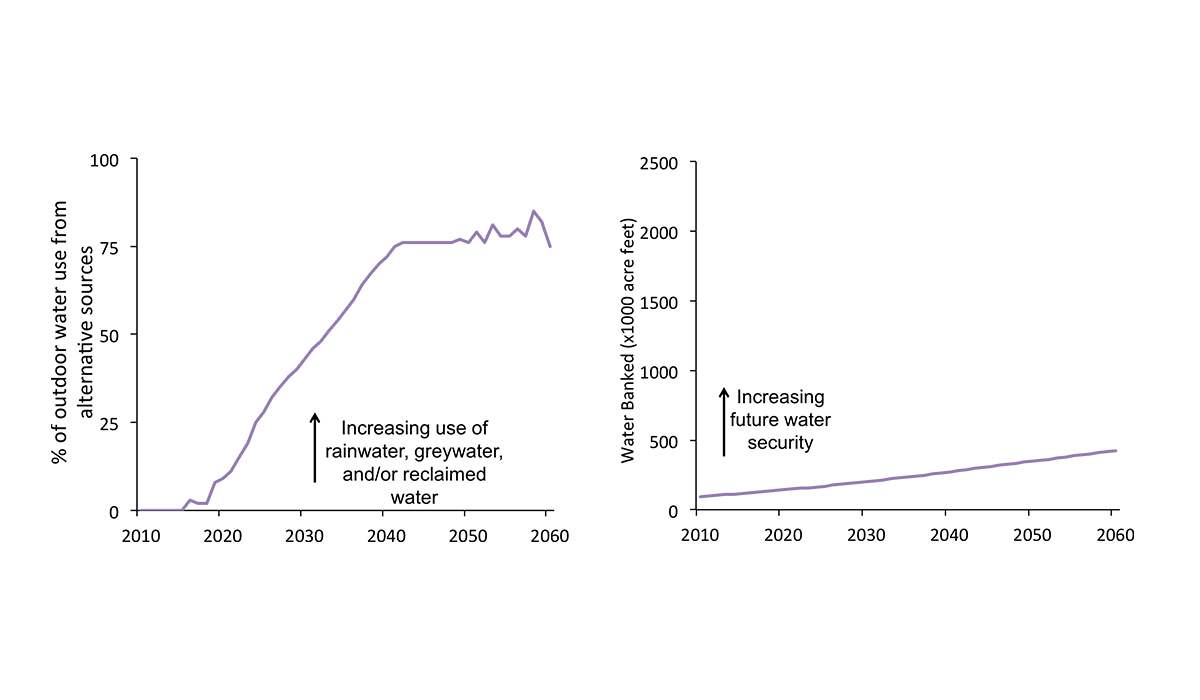 There is a substantial increase in outdoor water use from alternative sources. In addition, outdoor water conservation is increased as a result of technological solutions such as smart metering, leak detection, and other water efficiency measures. There is some water banked in this future through passive infiltration in areas of pervious surfaces, which have increased as a result of the creation of centralized, dense urban hubs. Overall, water banking and future water security is not significant without prioritizing strategies of direct water injection into groundwater supplies.