When we think about the main sources of greenhouse gases, we don’t typically consider dirt as being one of them. But, it’s true. Just by plowing their fields, farmers have released large amounts of carbon dioxide into the air. 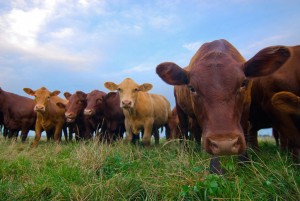 According to the Marin Carbon Project, “As much as one third of the surplus carbon dioxide in the atmosphere driving climate change today has come from land management practices.” Peter Byck, professor of practice at ASU’s School of Sustainability and director/producer of Carbon Nation™, is working with a team of researchers to provide a solution to this problem by encouraging farmers across the nation to practice soil carbon sequestration.

Soil carbon sequestration is the process of transferring carbon dioxide from the atmosphere in the soil through crop residues and other organic solids. This transfer can help off-set emissions from fossil fuel combustion as well as enhance soil quality thereby influencing long-term agronomic productivity. In other words, soil sequestration benefits the environment in twofold, by reducing emissions and improving rangeland soils. Watch the Carbon Nation™ short film Soil Carbon Cowboys, which discusses soil carbon sequestration, also known as carbon farming, below:

On November 3, 2014, Peter Byck moderated a panel discussion on soil sequestration at the Julie Ann Wrigley Global Institute of Sustainability with Richard Teague, rangeland specialist at Texas A&M, and Russ Conser, innovation specialist at Shell Game Changer (retired). Conser, Teague, and Byck also work together as part of the ASU Soil Carbon Nation™ Team. This team is made up of leading soil, livestock, biodiversity, and communications specialists all working toward providing an answer to a crucial question: What is the best rangeland management can do to contribute significantly to sequestering carbon in rangeland soils and improve rangeland social-ecological systems?

The panel discussion focused on exploring multiple areas of rangeland socio-ecological issues. Topics included conventional grazing compared to regenerative grazing techniques, the possibility of film as an education piece, and the significance of soil sequestration on the reduction of carbon dioxide on a global scale. Watch a video of the entire discussion below:

Similarly to soil carbon sequestration, anaerobic digestion technologies also work to promote healthy soils as well as further efforts against climate change. Anaerobic digestion is a series of processes in which organic waste is converted into biogas. The captured biogas can be upgraded to biomethane or renewable natural gas via pipe from a digester. Separated digested solids not used in biogas can be composted and directly applied to cropland or converted into other nutrient rich products. This year, LightWorks has furthered plans to optimize the area of anaerobic conversion of organic wastes to energy through collaboration with Proteus and Midwestern Bioag (MBA). Plans include working with ASU’s Biodesign Institute to focus on microbiology of anaerobic digesters to maximize nutrient value, establishing online training and certification platforms, as well as consulting experts from ASU’s Julie Ann Wrigley Global Institute of Sustainability to conduct life-cycle and economic assessments of the products from anaerobic digestion processes. As we step closer to a new year, LightWorks aims to continue its efforts to respond to the rapid pace of climate change by seeking out solutions that aim to enhance ecosystem functions as well as promote a future powered by renewable energy.