In our last two posts we started walking through the EPA’s calculation of state goals for CO2 emissions, covering Building Block 1 and Building Block 2. In this post, we’ll continue the walk-through with Building Block 3: Cleaner Generation Sources. 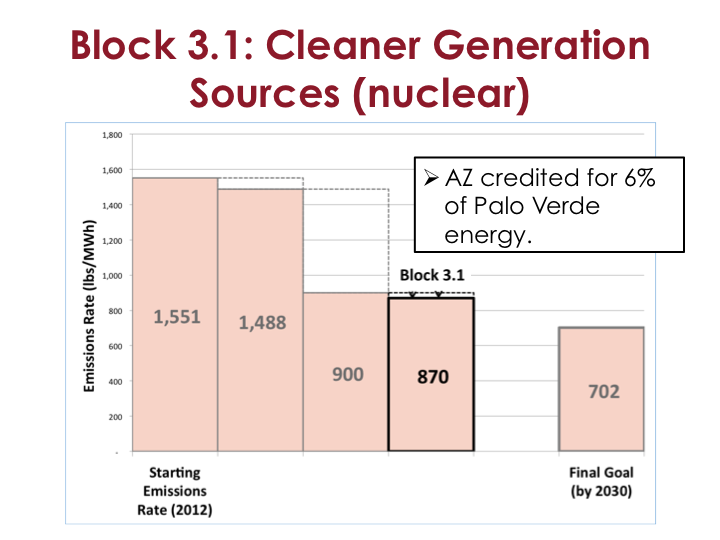 Neither nuclear power nor renewable energy (“RE” e.g. wind and solar) generation create any CO2 emissions. One could think of these as having a lbs/MWh emissions rate with a “0” in the numerator. Thus, to the extent that states add nuclear and renewable energy to their energy resource mix, they can lower their overall emissions rate.

While few states are actively building new nuclear plants, EPA proposes that states would get credit for a small fraction (6%) of energy from any existing nuclear power plants that are “at risk” of being retired. This credit would apply to Arizona’s Palo Verde Nuclear Generating Station, despite the fact that the plant’s operating license is not set to expire until 2045. 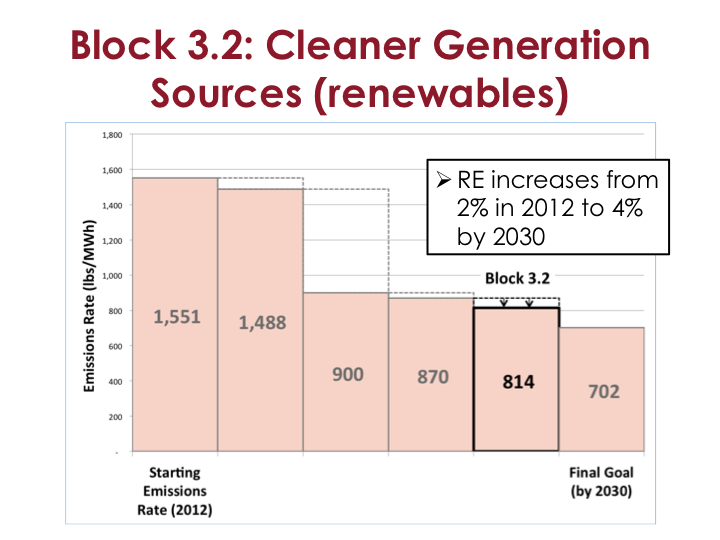 This final amount is considerably lower than most states. In fact, Arizona ranks 37th in terms of the overall amount of renewable energy generation anticipated (we’ll discuss the reasons for this low expectation in another post).

EPA’s expectation seems to underestimate Arizona’s likely performance in this category. For example, based on recent reporting from the states largest utilities Arizona Public Service (APS), Salt River Project (SRP), and Tucson Electric Power (TEP) had a combined renewable energy portfolio of 3,305,021 MWh in 2013, which is much higher than the EPA’s assumed starting point of 2,150,930 MWh. By the end of 2015, APS and TEP alone are planning to have combined renewable energy generation equal to 3,886,173 MWh, thus surpassing EPA’s target 15 years early. There are some complicating factors regarding how out-of-state generation might be counted (we will explore this in future posts), but in short, Arizona appears positioned to outperform the EPA’s proposal for Building Block 3. If that occurs, it would offer some flexibility for underperformance in the other Building Blocks. 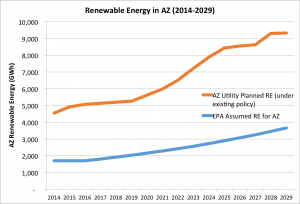