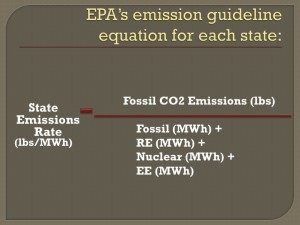 And how do these stack up to other states? To answer these questions, we thought it would be helpful to walk through some of the calculations that underpin the EPA’s proposal for Arizona.

As explained previously, the core of the EPA’s proposal is a requirement for each state to achieve a CO2 emissions rate (in lbs/MWh) unique to that state. Here’s the basic equation for the state’s emissions rate, which must be lowered over time:

States will be able to reduce their emissions rate (on the left hand side), by either lowering the pounds per megawatt hour (lbs/MWh) for fossil generation sources or by adding carbon-free sources (i.e. renewable energy, nuclear, and energy efficiency) to the mix. The EPA calculated each state’s final goal based on what the agency thought each state could achieve through a combination of four primary emissions reduction measures, or “Building Blocks”: 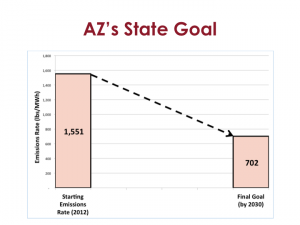 The EPA estimates that this combination of measures will enable Arizona to reduce its emissions rate to 702 lbs/MWh by 2030. In this post and the next few we’ll walk through these steps individually. It’s important to note, however, that the proposal does not prescribe any particular measure and the EPA ultimately intends for states to use whatever combination of building blocks or other measures they choose to meet the goal. 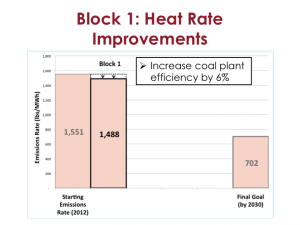 A power plant’s “heat rate” is a measure of how efficiently it converts fuel (e.g. coal, natural gas) into electricity. Steps to make a power plant more efficient can improve its heat rate. That means fewer emissions for each kWh of electricity generated. EPA assumes that all coal plants throughout the U.S. can achieve a 6% heat rate improvement and used this as the basis for Building Block 1. (Later we’ll discuss why this Building Block doesn’t play a big role for Arizona.)