In our last post we started walking through the EPA’s calculation of state goals for CO2 emissions, covering Building Block 1. In this post, we’ll continue the walk-through with Building Block 2: Redispatch from Coal to Natural Gas.

Compared to burning coal, burning natural gas emits roughly half the amount of CO2 for each unit of energy generated. (This ignores any upstream methane emissions associated with the extraction and transmission of natural gas. If included, these “fugitive” emissions could exacerbate the global warming potential of natural gas. Many efforts are under way to quantify and reduce fugitive emissions, but that’s outside the scope of this discussion). Thus, switching (or “redispatching”) from coal to natural gas can lower the overall emissions rate from fossil fuel generation sources. Additionally, many states have natural gas power plants that are not fully utilized and in theory could be used to displace coal. In fact, the EPA’s calculations suggest that there is enough natural gas capacity in Arizona to displace nearly all of its coal-fired generation, excluding plants on tribal land, which are initially exempt from the proposed rule. In total, Arizona ranks third among states in terms of energy from coal that EPA anticipates can be replaced with natural gas (behind Texas and Florida). Whether or not this is technically feasible will be a subject for future discussion on this forum.

Block 2 is perhaps the most controversial for Arizona because it will likely necessitate the retirement of several coal-fired power plants. The coal plants in Arizona potentially affected by the rule include: 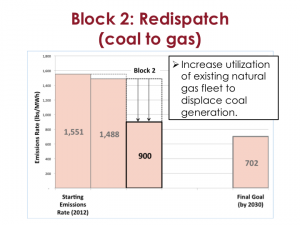 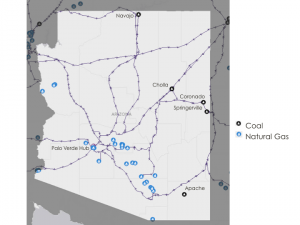 Additionally, many of the natural gas plants needed for redispatch in Arizona are located near the Palo Verde Nuclear Generating Station, a trading hub for electricity. Some policymakers have suggested that this could be a problem if the power grid is not robust enough to deliver all the energy from plants clustered in this one location after the coal plants are shut down. However, much more analysis of this issue is needed to draw any firm conclusions.