The following was contributed by Surya Iyer, Graduate Research Assistant for the RISN Incubator. 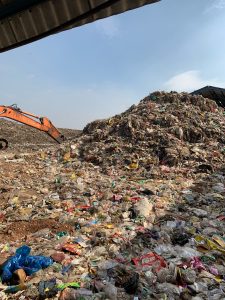 Last month I went back home to Mumbai for my winter break, the place where my journey with waste originally began. Growing up it really bothered me seeing all the overflowing containers of trash and the resulting pollution it caused, especially during monsoon. Mumbai had outgrown itself over the last 2 decades with the booming service industry. If we take all these learnings and a 3 hour’s drive from Mumbai, we reach Pune, an upcoming Megacity. That’s the location where Renewlogy, a waste to energy company within the RISN Incubator, decided to pilot its river clean up initiative. Renewlogy won a grant from the National Geographic to clean up the Ganges, one of the most polluted rivers in India and chose Pune for the pilot as it has one of the most efficient Waste Management initiatives in India. I joined the Renewlogy team to help with their ground research and efforts to learn more about these waste clean up initiatives in Pune. 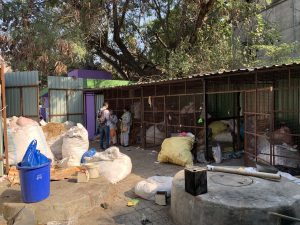 We first visited Swach, a wholly owned cooperative of self-employed waste pickers operating as an autonomous enterprise that provides door to door waste collection to citizens of Pune. Just imagine how cool would it be if you had someone come to your house every day and pick up your trash, for FREE! The Swach women are from low-income families and act as independent business owners responsible for collecting and selling the waste for their allotted region. They then bring all the waste to a small but highly efficient sorting station that they have set up all over Pune. Each woman work in their station, sorts the recyclables and bags them to make it ready for a vendor to come pick them up at the end of every day. 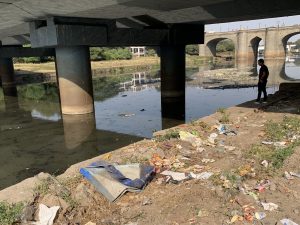 As we spent time in the Swach station and learning about their work, right across this place was the Mutha river. At first it looked like a normal river flowing right through the heart of Pune, however, as we walked by, we saw chunks of plastic sweeped across the banks and the river polluted with grey colored water flowing. The river was begging to be cleaned. As part of the Ganges clean up, Renewlogy was in the process of developing a fence based mechanism to place in the river that could collect all the flowing trash. Since this was a small river as compared to the Ganges, it turned out to be a perfect location to begin with.

One key barrier when it comes to waste management is the lack of education. A Reverse Vending Machine (RVM) could be a possible solution when it comes to efficient waste disposal and more importantly collection. With advanced technologies and a gamification aspect, RVM’s are coming up all over India and Renewlogy plans to put a similar one near their main project at the Ganges. Solving the waste problem didn’t sound that bad back in the U.S, but being out there I realized so many things which I wouldn’t typically sitting on my desk.