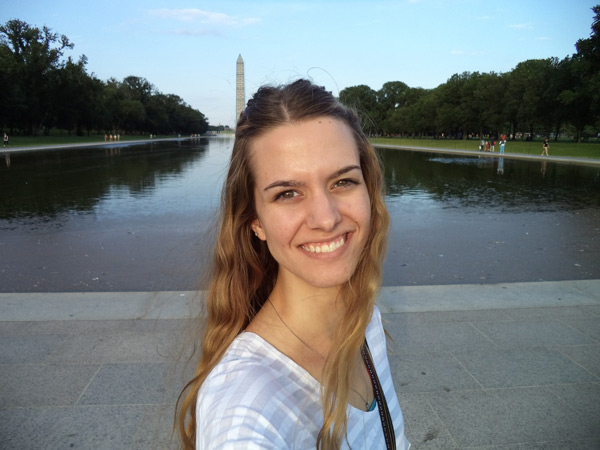 DC/London: Sustainability and Government: The Most Complicated Puzzle of All Time

Our time here in Washington, D.C. is officially over, and my brain feels like a sponge that can simply not soak in any more water.

Since my group’s arrival on Saturday, I’ve gone through just about every emotion that exists for a human being to experience, namely homesickness, sadness, anxiety, contentment, happiness, astonishment, curiosity, and excitement. There is nothing quite like being at the heart of our nation’s capitol. There is nothing quite like walking up and down the streets of a city that bustles with people that work together to run our country.

While we’ve been really lucky to get to travel to a few other offices so far during our stay, the home base for our study abroad group sessions is at ASU’s Washington D.C. center on Connecticut Avenue. It was indescribably awesome walking in that center on the first day. The place apparently used to be an apartment, and our faculty director herded us to the fully stocked kitchen where he pointed out sodas, fruit, and other snacks that were just for us. Not to mention, not only is everyone in this group friendly, everybody comes from a very diverse background and they are incredibly intelligent. It is seriously more than I could have asked for, to get to spend two weeks with such an awesome group of people.

We are tourists by night but from 9 to 5 each day, we’re at the mercy of our faculty director who has planned informative meetings for us all. So far we’ve had the privilege of speaking with eight or nine speakers. I actually attempted to present an analysis of all the interesting points that each speaker has made so far, compressed into one blogpost. Upon discovering that I could probably write a dissertation on every topic, comment, remark, idea, or thought that I personally found intriguing within the presentations of speakers, I think I’m going to stick to one general idea that I picked up on over the past few days.

The parallels between the concept of sustainability and government itself are amazing. Namely, they are both complicated when they are individually analyzed and get even more complicated when pieced together. It really is a giant puzzle that must be put together if solutions for sustainability-related problems are to be discovered and put into action.

Listening to our speakers, one of the main things I remember being stunned by is how nearly everything relates to the field of sustainability. As one of our speakers put it, “Everyone loves sustainability, but no one knows what it is.” Sustainability is everywhere in society, our economy, our environment (both manmade and natural), and, most particularly, within politics. And the more dimensions that are added to sustainability, the more complicated it gets.

This idea of utter complexity is consistent when it comes to the functions of government itself. Why? There are so many people within different departments that must work together to create and implement policy that ultimately define a nation’s actions, so to speak. This was demonstrated by a speaker who talked to us about how a government sets, implements, and acts within a federal budget. Let me tell you, if there was still a chance of me wanting to work directly within Congress someday, it was thoroughly destroyed by that talk. The budget process is ridiculously complex, what with how it is split up, what is required spending and what is not, how the final budget gets approved, who approves it, who suggests certain changes, who eventually decides who gets what, the lengthy process of approving final suggestions, deficits, etc.

Another lesson I took away from our meetings is that social, economic, and environmental aspects of sustainability are forever clashing with political interests. A perfect example of this is the National Institute for Heath’s struggle to obtain more funding for research for social sciences, or the Center for Green School’s quest to educate students on the importance of sustainability in every day life. Who knew that the scientific community faced such scrutiny and opposition from politicians that want their personal interests advanced? I think we all could have guessed as much, but our speakers provided interesting detail as to what kind of opposition the science community faces.

Several of our speakers mentioned the fact that it is far easier to block things from getting done than actually accomplishing tasks within Congress. This, I think, is problematic. In the end, the only way a goal is seemingly accomplished in government is by never giving up on it. But this very process of government and the notion of a need to never give up hope is like the idea of sustainability itself. There is a lot of human ignorance that must be combatted while dealing with social, economic, and environmental problems of today and tomorrow, but just as bills are pushed and pushed and eventually made into law within government, progress is gradually made day by day.

On that brainwave, just as our thoroughly knowledge-soaked minds are going to keep absorbing knowledge during our upcoming journey in London, we can only hope that the awareness of the population, too, gradually begins to grow.