Back in June of 2017 the Bloomberg Philanthropies launched the “Mayors Challenge” where US cities with populations of 30,000 or more were invited to participate in a competition with the potential to win up to $5 million, and realize their best ideas and innovations in response to urgent challenges being faced. Roughly 300 cities responded.

Led by Mayor Stanton, the City of Phoenix developed their bid: “Holistic Management of Urban Heat”. This week Phoenix was announced as one of the 35 winning “2018 Champion Cities” and will receive $100,000 to bring their ideas to life.

The problem posed by the city of Phoenix entry is: increasing urban heat threatens the health and well-being of vulnerable residents in Phoenix – the third hottest city in the U.S – as well as its long-term economic viability, yet the city lacks a cohesive strategy to address this major risk. The proposed solution is: the city of Phoenix will create a first-of-its-kind HeatReady program (like programs developed for storms) to enable local governments to holistically manage how they identify, prepare for, mitigate, track, and respond to the dangers of urban heat.

This endeavor was supported by a number of ASU faculty, staff, and students, including UCRC faculty affiliate David Hondula. Moving forward, this effort will be a collaborative venture engaging regional partners from a number of sources including the National Weather Service as well as, local and state health departments.

Next steps will include a convening of Champion Cities in an intensive workshop with innovation experts and leading urban practitioners from Bloomberg Philanthropies’ global network. Here competitors will become collaborators as cities help one another improve their ideas.

In October 2018, one of these cities will be awarded $5 million and another 4 cities will each receive $1 million to further develop and implement their plans.

Best of luck to the city of Phoenix, and congratulations for the vision that has brought them this far already!

We are excited to announce the call for abstracts for the UCRC 1st Annual Student Poster Competition on Tuesday, April 3, 2018 at the Memorial Union, Alumni Lounge, Room #202.

The intent of this poster competition is to showcase the breadth of work around issues of urban climate at ASU. This includes all social and physical science aspects of urban climate and its interaction with society and infrastructure. 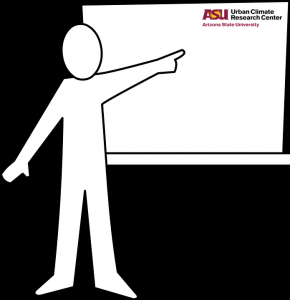 The poster session is intended to highlight urban climate research from undergraduates, graduate students, and postdocs. Completed research is preferred. Posters outlining research not yet conducted must provide sufficient details on research design.

Follow this link to submit your Poster Abstract:
Submit your Abstract

Two categories will be awarded: honor and merit awards. Honor awards will come with a monetary prize.