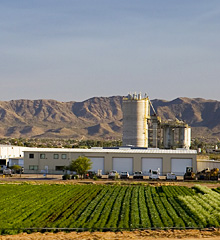 Today’s worldwide expansion of dryland cities consumes cultivated and native ecosystems. Urbanization of dryland farms may have biogeochemical consequences that differ from those accompanying farmland transformations in other biomes. In temperate regions, soil organic matter (SOM) pools often decline during cultivation. In dry regions, however, farms replace native ecosystems with inherently small soil nutrient pools, which may gain rather than lose carbon (C) and SOM upon land transition. Around Phoenix, Arizona, USA, we compared soil nutrient pools in residential yards converted from farms to nutrient pools in yards developed on native desert.

A subset of sites from the CAP LTER Survey 200 was used. For each parcel, we obtained the year of transition to residential use (YoT) from the Maricopa County Tax Assessor. In each site, a composite soil sample was obtained by combining four, 10-cm deep soil cores. Soils were analyzed for total C and total nitrogen (N), bioavailable, inorganic phosphorus (Pav), SOM, and conductivity. The density of rock-free, dry, soil was used to convert C, N, Pav, and SOM concentrations to mass X m-2 ground surface area, integrated through 10-cm depth. Soil density did not differ between yards with and without an agrarian past (ANOVA p = 0.96).

Prior to farming activity, soil nutrient and C pools differed between lands that were and were not eventually farmed, that is, ecological differences result from naturally occurring phenomenon that predate the time period in which land use differed.

This hypothesis cannot be accepted for two reasons. First, the targets for dryland cultivation are not inherently more fertile, as we observed no systematic changes in the nutrient pools of desert soils across an elevation gradient from slopes to floodplains. Second, the range and variability of nutrient pools that occur in desert soils are unlikely to produce the patterns we observed in residential soils (shown with the K-S test). Thus, differences in soil properties that we observed between residential parcels of former agrarian use and parcels of former desert cover probably did not exist before agriculture commenced.

Differences in soil nutrient and C pools between once-farmed and never-farmed yards emerged after urbanization because yard management/maintenance is shaped by historic land use.

Information on house age casts doubt on this hypothesis. The YoT × transition type interaction term was not significant for SOM, C, N, and conductivity. Thus, between residential parcels of prior agrarian use and parcels of prior desert cover, differences existed before the land became residential.

Differences in soil nutrient and C pools between once-farmed and never-farmed land derive directly from agrarian practices and persist despite subsequent urbanization.