DCDC researchers will be participating in the fourteenth anniversary of the Central Arizona–Phoenix Long-Term Ecological Research (CAP LTER) Project at Arizona State University. The Fourteenth Annual All Scientists Meeting and Poster Symposium, "Synthesizing Urban Systems Research," will be held on January 13, 2012 in the Convergence Room at Arizona State University’s SkySong facility.

Water Dynamics in a Desert City 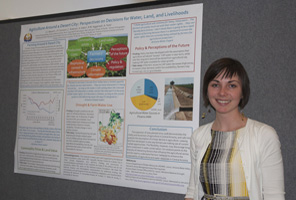 Climate change and population growth have far-reaching implications for water resources in the arid American Southwest. Despite the rapid pace of urbanization in Arizona, agriculture accounts for around 70% of total water use in the state. This study is based on interviews conducted with a wide range of stakeholders in agriculture from July -December 2011 to get multiple cross-scale perspectives on the historical and current stresses on agriculture in the Phoenix metropolitan area and the role of irrigation institutions in influencing agricultural water use. The analysis explicitly considered how recent events, such as the recession and boom in commodity prices have influenced farmers' decisions. The results illustrate that while irrigation infrastructure has largely buffered farmers from inter-annual variability in water availability, interviewees noted several other stresses related to development pressures, labor availability, air quality regulations and energy costs. On one hand, the expansion of agricultural acreage and water demand in since 2007 demonstrates the vitality of agriculture in Central Arizona. On the other hand, it alerts us to the limitations of irrigation institutions and infrastructure in conveying the right signals about future water scarcity. Looking forward, uncertainties in water availability, urbanization pressures, and U.S. farm policy challenge the long-term viability of agriculture in Central Arizona. This analysis underscores the complexity of the farm decision environment, suggesting that if farmers are to play specific roles in Central Arizona’s water future, policy makers will need to understand the factors that underlie farmers' decision making and the circumstances that maintain farm viability around the metropolitan area. 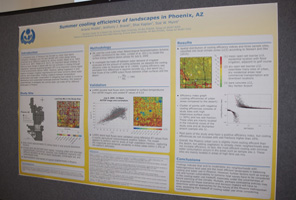 The summer cooling-water use tradeoff is investigated for different landscapes in Phoenix, Arizona using calculations of atmospheric energy fluxes from a model called the Local-Scale Urban Meteorological Parameterization Scheme (LUMPS, after Grimmond and Oke, 2002) and a cooling efficiency concept after Shashua-Bar et al. (2009). We examined two summer days in 2005 to analyze the cooling efficiency of different land cover mixes in the urban core. LUMPS model results were correlated to surface temperatures from Advanced Spaceborne Thermal Emission and Reflection Radiometer (ASTER) imagery and reference evapotranspiration values from a meteorological station for validation. Cooling efficiency was estimated from daytime sensible and latent heat flux differences of the LUMPS raw fluxes for urban surfaces and the desert. Results indicate that cooling at night is strongly influenced by the heat storage capacity of different land cover types and by the amount of vegetation. Efficiency index results suggest that overall, the Phoenix urban core is slightly more efficient at cooling than the desert, but efficiencies do not increase much with wet fractions higher than 20%. Industrial sites with high impervious surface cover and low wet fraction result in negative cooling efficiencies compared to the desert. Findings indicate that low to moderately dry neighborhoods with heterogeneous land uses are the most efficient landscapes in balancing cooling and water use in Phoenix. However, further factors such as energy use and human vulnerability to extreme heat waves have to be considered in the cooling-water use tradeoff, especially under the uncertainties of future warming of the climate. 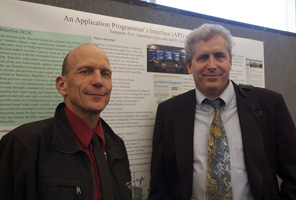 Our mission at the Decision Center for a Desert City (DCDC) is to "conduct climate, water, and decision research and to develop innovative tools to bridge the boundary between scientists and decision makers in order to put our work into the hands of those whose concern is for the sustainable future of Greater Phoenix." The WaterSim water policy and management model represents one of the core tools created, updated, and maintained by DCDC. We use WaterSim to examine the potential impact of uncertainties in climate and policies on water supply and demand. The newest version of WaterSim—WaterSim 5.0—represents a radical departure from previous versions. Our newly released, provider-level model (individual water providers are modeled separately but evaluated in the aggregate) includes: 1) a city infrastructure model that simulates the movement of water through a standard city system including the water use chain starting from water supply and treatment to delivery to residential and commercial users and, eventually, effluent production and the possible pathways of reclaimed and recycled water; 2) a hierarchical demand-based water supply module; and 3) an open source API and associated documentation which enables others to freely use the WaterSim model for their own research, education, and outreach. This poster presents the programmatic structure and function of WaterSim 5.0 and highlights the potential applications of the model for the decision making arena.