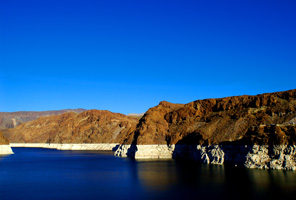 Stephanie Deitrick, PhD student in the School of Geographical Sciences and Urban Planning at ASU and past DCDC Graduate Research Assistant, is currently recruiting people to answer questions on the influence of visual representation on decision-making. The survey will take 20-30 minutes to complete.

The results of the research may be published, but your name will not be used. Participants in this survey will have the opportunity to be entered into a drawing for Amazon gift cards ranging from $50-$80 each.

If you would like to help Stephanie with her research, please link to the visualization water planning survey and complete the questionnaire. Thank you from Stephanie for your assistance.

By Skip Derra at ASU News

CH2M HILL’s WaterMatch, a grassroots, goodwill initiative that promotes the reuse of municipal effluent for industrial and agricultural use, is expanding through collaborations with companies and universities around the world. Arizona State University and Intel are among the targets for this expansion in the U.S.

CH2M HILL, a program management, construction management and design firm located in Denver, developed WaterMatch as a free website that uses social networking and geospatial mapping to connect water generators with water users. “We are expanding WaterMatch and the grassroots water reuse revolution to promote progress through partnerships and projects on the ground,” said Jan Dell, vice president at CH2M HILL. “We invite companies, municipalities and universities to join us in this effort.”

CH2M HILL launched WaterMatch in 2011. Recognizing the importance of water reuse and the low rates of implementation around the world, corporations and universities are partnering with WaterMatch to promote reuse and sustainable water management through a variety of actions. WaterMatch has more than 21,000 potential water reuse sources and is growing daily.

ASU and Intel are working with local municipalities in Arizona and the U.S. Southwest to populate the WaterMatch map and associated wastewater treatment plant profiles. They also are conducting research into the uses and benefits of WaterMatch.

“Sustainable water management is a key focus at Intel,” said Gary Niekerk, director of Corporate Citizenship at Intel. “We created the external collaboration with CH2M HILL‘s WaterMatch, ASU’s Global Institute of Sustainability and ASU’s Decision Center for a Desert City to increase water sustainability in our local community.” Niekerk added that Intel believes that technology can play an important role in addressing the world’s sustainability challenges.

The university program will leverage what is learned from successful pilot projects at Arizona State University and the University of California-San Diego.

“Our students are eager to engage on the critical issue of water sustainability in Arizona and work on a grassroots project,” said John Sabo, director of Research Development at ASU’s Global Institute of Sustainability. “It’s great to see the program our students helped to pilot expand globally.”

Also helping to populate the map and grow the user base are SGS, a global inspection, testing, verification and certification company in Poland; British Water in the United Kingdom; and ConocoPhillips, working in Indonesia.

To tap into the energy and creativity of students, and offer them real-world learning experiences that support local community and economic development, WaterMatch is collaborating on a global WaterMatch Makers university program with Net Impact, a global nonprofit that supports a new generation of leaders who work for a more sustainable world. 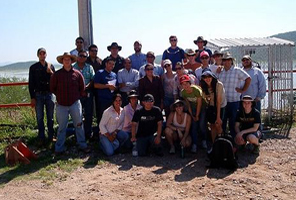 On August 24, 2012, ten ASU students working on an NSF-funded summer research, cultural and educational experience called the US-Mexico Border Water and Environmental Sustainability Training (UMB-WEST) program will give their final presentations on their experience.

During the presentation, students will describe their research visits and field work in Sonora, Mexico, focused on water resources management and sustainability. This is a great way to find out about the program for folks interested in participating in summer 2013 or 2014.

Join us on August 24 at 10 am in ISTB4, Room 240. More information is available at: Hydrology Wikie and the ASU Explorers Blog.

“The Science of Water Art: A Citizen Science Project” – a collaborative research project that brings together professionals, community members, college students and children to think about the role that water plays in each of our lives – will be on display Sept. 1-30 at ASU’s Deer Valley Rock Art Center.

The project is part of a larger global ethnohydrology study that is starting its fifth year with a look at the role of water, climate change and health in several communities worldwide. The study is sponsored by ASU’s School of Human Evolution and Social Change (SHESC).

The art facet of this study allows for a look into how climate change and water insecurity are viewed by younger generations, and gives a voice to children so that they may share their outlooks on this vital resource.

This study used a sample of fourth-grade classrooms across Arizona in collecting more than 3,000 drawings of children’s perception of water today and in the future. The nine- to 11-year-olds were asked by their teachers to draw two pictures with the following prompts: 1) Please draw a picture showing water being used in your neighborhood; and 2) Please draw a picture showing how you imagine water will be used in your neighborhood 100 years from now.

The exhibit is free with museum admission: $7 adults; $4 seniors, military and students; $3 children 6-12. Children 5 and younger are free.

Dynamics of Water in Urban Ecosystems

In our first Water/Climate Briefing for 2012-2013, DCDC sets the stage with a broad-based discussion of future topics related to this year’s theme: The dynamic role of water within urban ecosystems in relation to the management of cities and regions of Arizona. Our panelists will explore:

We hope to provide opportunities for researchers, water resource managers, and the public to gain insight to the challenges of water within our urban places and ecosystems.

Lunch will be served. Please RSVP to: Sarah.Jones.2@asu.edu 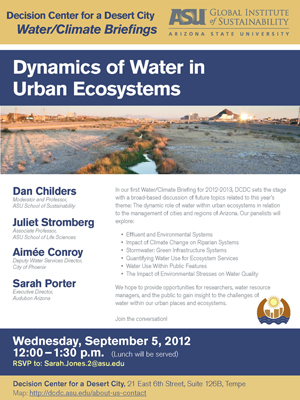 By Justin Gillis via The New York Times 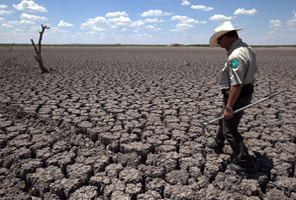 The percentage of the earth’s land surface covered by extreme heat in the summer has soared in recent decades, from less than 1 percent in the years before 1980 to as much as 13 percent in recent years, according to a new scientific paper.

The change is so drastic, the paper says, that scientists can claim with near certainty that events like the Texas heat wave last year, the Russian heat wave of 2010 and the European heat wave of 2003 would not have happened without the planetary warming caused by the human release of greenhouse gases.

Those claims, which go beyond the established scientific consensus about the role of climate change in causing weather extremes, were advanced by James E. Hansen, a prominent NASA climate scientist, and two co-authors in a scientific paper published online on Monday in the Proceedings of the National Academy of Sciences.

“The main thing is just to look at the statistics and see that the change is too large to be natural,” Dr. Hansen said in an interview. The findings provoked an immediate split among his scientific colleagues, however.

Some experts said he had come up with a smart new way of understanding the magnitude of the heat extremes that people around the world are noticing. Others suggested that he had presented a weak statistical case for his boldest claims and that the rest of the paper contained little that had not been observed in the scientific literature for years.

The divide is characteristic of the strong reactions that Dr. Hansen has elicited playing dual roles in the debate over climate change and how to combat it. As the head of the Goddard Institute for Space Studies in Manhattan, he is one of NASA’s principal climate scientists and the primary custodian of its records of the earth’s temperature. Yet he has also become an activist who marches in protests to demand new government policies on energy and climate.

The latter role — he has been arrested four times at demonstrations, always while on leave from his government job — has made him a hero to the political left, and particularly to college students involved in climate activism. But it has discomfited some of his fellow researchers, who fear that his political activities may be sowing unnecessary doubts about his scientific findings and climate science in general.

Climate-change skeptics routinely accuse Dr. Hansen of manipulating the temperature record to make global warming seem more serious, although there is no proof that he has done so and the warming trend has repeatedly been confirmed by other researchers.

Scientists have long believed that the warming — roughly 2.5 degrees Fahrenheit over land in the past century, with most of that occurring since 1980 — was caused largely by the human release of greenhouse gases from burning fossil fuels. Such emissions have increased the likelihood of heat waves and some other types of weather extremes, like heavy rains and snowstorms, they say.

But researchers have struggled with the question of whether any particular heat wave or storm can be definitively linked to human-induced climate change.

In the new paper, titled “Perception of Climate Change,” Dr. Hansen and his co-authors compared the global climate of 1951 to 1980, before the bulk of global warming had occurred, with the climate of the years 1981 to 2011.

They computed how much of the earth’s land surface in each period was subjected in June, July and August to heat that would have been considered particularly extreme in the period from 1951 to 1980. In that era, they found, only 0.2 percent of the land surface was subjected to extreme summer heat. But from 2006 to 2011, extreme heat covered from 4 to 13 percent of the world, they found.

“It confirms people’s suspicions that things are happening” to the climate, Dr. Hansen said in the interview. “It’s just going to get worse.”

The findings led his team to assert that the big heat waves and droughts of recent years were a direct consequence of climate change. The authors did not offer formal proof of the sort favored by many climate scientists, instead presenting what amounted to a circumstantial case that the background warming was the only plausible cause of those individual heat extremes.

Dr. Hansen said the heat wave and drought afflicting the country this year were also a likely consequence of climate change.

Some experts said they found the arguments persuasive. Andrew J. Weaver, a climate scientist at the University of Victoria in British Columbia who reviewed the paper before publication, compared the warming of recent years to a measles outbreak popping up in different places. As with a measles epidemic, he said, it makes sense to suspect a common cause.

“You can actually start to see these patterns emerging whereby in any given year more and more of the globe is covered by anomalously warm events,” Dr. Weaver said.

But some other scientists described the Hansen paper as a muddle. Claudia Tebaldi, a scientist with an organization called Climate Central that seeks to make climate research accessible to the public, said she felt that the paper was on solid ground in asserting a greater overall likelihood of heat waves as a consequence of global warming, but that the finding was not new. The paper’s attribution of specific heat waves to climate change was not backed by persuasive evidence, she said.

Martin P. Hoerling, a researcher with the National Oceanic and Atmospheric Administration who studies the causes of weather extremes, said he shared Dr. Hansen’s general concern about global warming. But he has in the past criticized Dr. Hansen for, in his view, exaggerating the connection between global warming and specific weather extremes. In an interview, he said he felt that Dr. Hansen had done so again.

Dr. Hoerling has published research suggesting that the 2010 Russian heat wave was largely a consequence of natural climate variability, and a forthcoming study he carried out on the Texas drought of 2011 also says natural factors were the main cause.

“This isn’t a serious science paper,” Dr. Hoerling said. “It’s mainly about perception, as indicated by the paper’s title. Perception is not a science.”

Read the entire article at The New York Times.