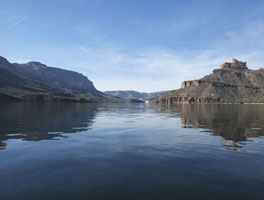 WASHINGTON, D.C. – Secretary of the Interior Ken Salazar today announced the release of a study – authorized by Congress and jointly funded and prepared by the Bureau of Reclamation and the seven Colorado River Basin states – that projects water supply and demand imbalances throughout the Colorado River Basin and adjacent areas over the next 50 years. The Colorado River Basin Water Supply and Demand Study, the first of its kind, also includes a wide array of adaptation and mitigation strategies proposed by stakeholders and the public to address the projected imbalances.

The average imbalance in future supply and demand is projected to be greater than 3.2 million acre-feet by 2060, according to the study. One acre-foot of water is approximately the amount of water used by a single household in a year. The study projects that the largest increase in demand will come from municipal and industrial users, owing to population growth. The Colorado River Basin currently provides water to some 40 million people, and the study estimates that this number could nearly double to approximately 76.5 million people by 2060, under a rapid growth scenario.

“There’s no silver bullet to solve the imbalance between the demand for water and the supply in the Colorado River Basin over the next 50 years – rather, it’s going to take diligent planning and collaboration from all stakeholders to identify and move forward with practical solutions,” said Secretary Salazar. “Water is the lifeblood of our communities, and this study provides a solid platform to explore actions we can take toward a sustainable water future. While not all of the proposals included in the study are feasible, they underscore the broad interest in finding a comprehensive set of solutions.”

Authorized by the 2009 SECURE Water Act, the study analyzes future water supply and demand scenarios based on factors such as projected changes in climate and varying levels of growth in communities, agriculture and business in the seven Colorado River Basin states of Arizona, California, Colorado, New Mexico, Nevada, Utah, and Wyoming.

The study includes over 150 proposals from study participants, stakeholders and the public that represent a wide range of potential options to resolve supply and demand imbalances. Proposals include increasing water supply through reuse or desalinization methods, and reducing demand through increased conservation and efficiency efforts. The scope of the study does not include a decision as to how future imbalances should or will be addressed. Reclamation intends to work with stakeholders to explore in-basin strategies, rather than proposals – such as major trans-basin conveyance systems – that are not considered cost effective or practical.

“This study is one of a number of ongoing basin studies that Reclamation is undertaking through Interior’s WaterSMART Program,” said Assistant Secretary for Water and Science Anne Castle. “These analyses pave the way for stakeholders in each basin to come together and determine their own water destiny. This study is a call to action, and we look forward to continuing this collaborative approach as we discuss next steps.”

WaterSMART is Interior’s sustainable water initiative and focuses on using the best available science to improve water conservation and help water-resource managers identify strategies to narrow the gap between supply and demand. The WaterSMART program includes Reclamation’s Water and Energy Efficiency grants, Title XVI Reclamation and Recycling projects, and USGS’s Water Availability and Use Initiative.”This study brings important facts and new information to the table so that we can better focus on solutions that are cost effective, practical and viable” said Bureau of Reclamation Commissioner Mike Connor. “We know that no single option will be enough to overcome the supply and demand gap, and this study provides a strong technical foundation to inform our discussions as we look to the future.”

Spanning parts of the seven states, the Colorado River Basin is one of the most critical sources of water in the western United States. The Colorado River and its tributaries provide water to about 40 million people for municipal use; supply water used to irrigate nearly 4 million acres of land, and is also the lifeblood for at least 22 Native American tribes, 7 National Wildlife Refuges, 4 National Recreation Areas, and 11 National Parks. Hydropower facilities along the Colorado River provide more than 4,200 megawatts of generating capacity, helping meet the power needs of the West.

Throughout the course of the three-year study, eight interim reports were published to reflect technical developments and public input. Public comments are encouraged on the final study over the next 90 days; comments will be summarized and posted to the website for consideration in future basin planning activities.

The full study – including a discussion of the methodologies and levels of uncertainty – is available at https://www.usbr.gov/lc/region/programs/crbstudy.html.

By Felicity Barringer via The New York Times on December 9, 2012

The federal government has come up with dozens of ways to enhance the diminishing flow of the Colorado River, which has long struggled to keep seven states and roughly 25 million people hydrated.

Among the proposals in a report by the Bureau of Reclamation, parts of which leaked out in advance of its expected release this week, are traditional solutions to water shortages, like decreasing demand through conservation and increasing supply through reuse or desalination projects.

But also in the mix, and expected to remain in the final draft of the report, is a more extreme and contentious approach. It calls for building a pipeline from the Missouri River to Denver, nearly 600 miles to the west. Water would be doled out as needed along the route in Kansas, with the rest ultimately stored in reservoirs in the Denver area.

The fact that the Missouri River pipeline idea made the final draft, water experts say, shows how serious the problem has become for the states of the Colorado River basin. “I pooh-poohed this kind of stuff back in the 1960s,” said Chuck Howe, a water policy expert and emeritus professor of economics at the University of Colorado, Boulder. “But it’s no longer totally unrealistic. Currently, one can say ‘It’s worth a careful look.’ “

The pipeline would provide the Colorado River basin with 600,000 acre-feet of water annually, which could serve roughly a million single-family homes. But the loss of so much water from the Missouri and Mississippi River systems, which require flows high enough to sustain large vessel navigation, would most likely face strong political opposition.

“If this gets any traction at all, people in the flyover states of the Missouri River basin probably will scream,” said Burke W. Griggs, the counsel for the Kansas Agriculture Department’s division of water resources. But, he added, the proposal “shows you the degree to which water-short entities in the Colorado River basin are willing to go to get water” from elsewhere, rather than fight each other over dwindling supplies, as they have intermittently for about a century.

The new report addresses the adequacy of water supplies over the next 50 years in the Colorado basin, which includes the central and southern Rocky Mountains, the deserts of the Southwest and Southern California. The study, the officials said, will serve as a road map for future federal action in collaboration with the Colorado River basin states.

The Denver Post described the pipeline option in an article last week.

As far as future water supplies go, the outlook is not good. Most Colorado River water is currently used for agriculture, but that is beginning to shift as the cities of the Southwest continue to grow.

The effects of climate change could result in less precipitation over the Rockies, further stressing the supply.

Existing agreements among the states that depend on the river oblige those in the upper basin (including Colorado, Utah and Wyoming) to provide a specified amount of flow downstream. The fear, Professor Howe said, is that there will not be enough Colorado water for all, and that downstream states like Arizona and California will nonetheless call for their usual deliveries from the upstream states, renewing old water wars.

To avert that, new sources of supply or a sharp reduction in demand would be required.

Rose Davis, a spokeswoman for the Bureau of Reclamation, said that during the course of the study, the analysis done on climate change and historical data led the agency “to an acknowledged gap” between future demand and future supply as early as the middle of this century.

That is when they put out a call for broader thinking to solve the water problem. “When we did have that wake-up call, we threw open the doors and said, ‘Bring it on,’ ” she said. “Nothing is too silly.”

Jason Bane of Western Resource Advocates, a conservation organization based in Boulder, Colo., described the Missouri pipeline option as “fundamentally 20th-century water-policy thinking that doesn’t work in the 21st century.” He added, “We clearly need to conserve and be more efficient with the water we have.”

It is unclear how much such a pipeline project would cost, though estimates run into the billions of dollars. That does not include the cost of the new electric power that would be needed (along with the construction of new generating capacity) to pump the water uphill from Leavenworth, Kan., to the front range reservoirs serving Denver, about a mile above sea level, according to Sharlene Leurig, an expert on water-project financing at Ceres, a nonprofit group based in Boston that works with investors to promote sustainability.

If the Denver area had this new source of water to draw on, it could reduce the supplies that come from the Colorado River basin on the other side of the Continental Divide.

But Mr. Griggs and some federal officials said that the approval of such a huge water project remained highly unlikely.

Ms. Leurig noted that local taxpayers and utility customers would be shouldering most of the expense of such a venture through their tax and water bills, which would make conservation a more palatable alternative.