The National Science Foundation (NSF) and NBC Learn (NBC News’ educational arm) have teamed up to produce a new informative video series that examines the long-term health of one of America’s most important resources: water.

As climate rapidly changes and population grows, providing a sufficient supply and quality of water will be a critical challenge to people everywhere. These videos aim to help advance public understanding of the effects human activity and climate variability have on water and its distribution system.

The series highlights research funded by NSF and looks at the lives of scientists who are hard at work on projects designed to help pave the way to a more sustainable future. Each video features an NSF-supported scientist from a diversity of fields, geographic locations and institutions explaining a specific challenge and how these challenges are affecting the water supply. Each episode is available cost-free to teachers, students and the public at NSF and NBCLearn.com websites.

“Most Americans take water for granted,” said Roger Wakimoto, assistant director for NSF’s Directorate for Geosciences. “We have occasional water restrictions, but for most of us, when we turn on the tap, water is there. This series with NBC Learn aims to help people become more conscious of the threats to our water supply and understand the steps that need to be taken to maintain it.”

This video uses animation, graphics, and video clips to illustrate and explain each of the “flow” and “storage” processes in the Hydrologic Cycle, more commonly known as the Water Cycle: precipitation, interception, runoff, infiltration, percolation, groundwater discharge, evaporation, transpiration, evapotranspiration, and condensation.

Baltimore, Maryland is a major city situated on the Chesapeake Bay- a sprawling 64,000 square mile watershed. Currently, the Chesapeake is facing an environmental crisis due to pollutants. Scientist Claire Welty of the University of Maryland-Baltimore County is monitoring the travel times of pollutants in the urban streams in and around Baltimore. Through her research, she hopes to gain an understanding of the urban water cycle, and how municipalities can better prevent pollutants from contaminating the greater watershed.

The Rocky Mountains supply water to more than 60 million homes in the West, but this crucial water shed is in peril due to a tiny insect called the mountain pine beetle. Scientists Reed Maxwell of Colorado School of Mines and John Stednick of Colorado State University have teamed up to study the impact of the mountain pine beetle on water quantity and quality in the area.

Snow melt from the snow pack in the Sierra Nevada mountain range provides drinking water to about 30% of California’s residents, irrigates key crops in the San Joaquin valley, and runs hydroelectric power plants that supply at least 15% of the state’s electricity. Scientists Martha Conklin and Tom Harmon of the University of California, Merced are conducting research at the Southern Sierra Critical Zone Observatory, using wireless sensor technology to more accurately measure snow pack and snow melt so that state water managers can make better decisions on how to allocate this precious resource.

Part of the earth’s largest surface freshwater system, Lake Erie is a vital source of drinking water for 11 million people. Researchers Anna Michalak, Tom Bridgeman, and Pete Richards are studying how farming practices and severe weather can increase the amount of fertilizer-derived nutrients in the water, which diminishes water quality and threatens the lake’s ecosystem and the public’s health.

Farmers in Kansas and other states that sit atop the Ogallala aquifer – the largest freshwater aquifer in North America – are pumping out water for crop irrigation far faster than natural seepage of rainwater can replenish it. Scientist David Hyndman from Michigan State University is helping develop a plan to better manage this vital resource for sustainable farming.

The nearly 10 million people in the city and county of Los Angeles, California require a lot of water – most of which is imported snow melt from the Eastern Sierra Nevadas and Rocky Mountains, hundreds of miles away. UCLA researchers Stephanie Pincetl and Mark Gold are studying how Los Angeles can reduce its water imports and better capture, store and reuse water for a more sustainable water supply.

All video provided by the National Science Foundation and NBC Learn. 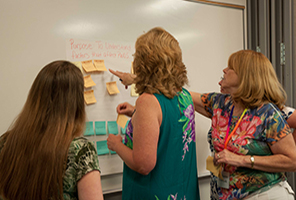 In conjunction with Arizona Project WET, the Water Sustainability Program, and UA’s Water Resources Research Center, DCDC hosted 35 teachers at the eighth annual workshop. The theme of this year’s workshop was, “Using Models to Simplify the Complex Interactions of Water in the Valley.”

Educators joined us to enhance their knowledge about how scientists and engineers develop and use models to solve problems and ask questions about water in the city. After completing this workshop educators understood how:

Science and Public Policy, published by Oxford Journals, is a leading international journal on public policies for science, technology and innovation. It covers all types of science and technology in both developed and developing countries.

DCDC publications having an impact include the following articles published in Science and Public Policy in 2010 and 2011 that were most cited during 2012.

The connection between scientific knowledge and environmental policy is enhanced through boundary organizations and objects that are perceived to be credible, salient, and legitimate. In this study, water resource decision makers evaluated the knowledge embedded in WaterSim, an interactive simulation model of water supply and demand presented in an immersive decision theater. Content analysis of individual responses demonstrated that stakeholders were fairly critical of the model’s validity, relevance, and bias. Differing perspectives reveal tradeoffs in achieving credible, salient, and legitimate boundary objects, along with the need for iterative processes that engage them in the co-production of knowledge and action.

User engagement, stakeholder involvement, and public consultation in sustainability research have received increased attention over the last decade. Key driving factors behind this are that social outcomes, policy relevance, and user engagement have all become requirements for securing research funding. Many articles have provided compelling arguments for the need to reconsider why, when and how users are engaged within the research process. We propose a typology of user engagement strategies in research, focusing on the actual research process and emphasizing types of engagement in research. We illustrate these types with a comparative analysis of empirical examples from three interactive sustainability research projects, based in Canada and Switzerland. The article discusses the challenges that require a reconfiguration of institutional and organizational structures to seize the full potential of interactive sustainability research.