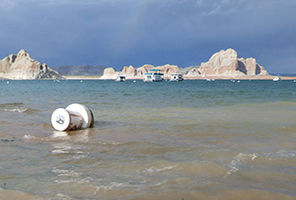 The patroller stopped his water district truck and grabbed his camcorder.

“Here we go,” he said, sliding from the cab and pointing his lens at the fine spray of water and rainbow rising from pop-up sprinklers on the lawn of a low-slung ranch home.

“Thursday,” he spoke, recording the day as evidence. No watering allowed on Thursdays.

Welcome to the future, where every drop of Colorado River water is guarded and squeezed. Only here, in the city that gets 90 percent of its water from the fickle and fading river, the future is now.

The vast and highly urbanized Southwest, built on the promise of a bountiful river propped up by monumental dams, is up against its limits. Already tapped beyond its supply, the river is now threatened by a warming climate that shrinks its alpine source.

To support fast-growing urban populations in a time of dwindling supply, the Southwest is due for rapid and revolutionary changes.

A region that uses two-thirds of its water outdoors, and mostly for agriculture, will have to find ways of sharing and boosting efficiency — a shift that many experts believe will mean city dwellers paying to upgrade rural irrigation systems.

Cities such as Phoenix and Las Vegas, which have reduced their per-person water usage through better landscaping and appliances, will have to do better. They lag behind Los Angeles, whose growing population, by necessity, uses no more water than it did 40 years ago.

Water suppliers from Denver to San Diego will spend billions of dollars to squeeze more out of each drop, and to clean and use wastewater and salt water. It means a future of higher water bills, further promoting conservation.

By Brandon Loomis and Mark Henle, The Republic | azcentral.com

Read the entire article at azcentral.com.