By Ian Johnson via The New York Times

BEIJING — China is pushing ahead with a sweeping plan to move 250 million rural residents into newly constructed towns and cities over the next dozen years — a transformative event that could set off a new wave of growth or saddle the country with problems for generations to come.

The government, often by fiat, is replacing small rural homes with high-rises, paving over vast swaths of farmland and drastically altering the lives of rural dwellers. So large is the scale that the number of brand-new Chinese city dwellers will approach the total urban population of the United States — in a country already bursting with megacities.

This will decisively change the character of China, where the Communist Party insisted for decades that most peasants, even those working in cities, remain tied to their tiny plots of land to ensure political and economic stability. Now, the party has shifted priorities, mainly to find a new source of growth for a slowing economy that depends increasingly on a consuming class of city dwellers.

The shift is occurring so quickly, and the potential costs are so high, that some fear rural China is once again the site of radical social engineering. Over the past decades, the Communist Party has flip-flopped on peasants’ rights to use land: giving small plots to farm during 1950s land reform, collectivizing a few years later, restoring rights at the start of the reform era and now trying to obliterate small landholders.

Across China, bulldozers are leveling villages that date to long-ago dynasties. Towers now sprout skyward from dusty plains and verdant hillsides. New urban schools and hospitals offer modern services, but often at the expense of the torn-down temples and open-air theaters of the countryside.

“It’s a new world for us in the city,” said Tian Wei, 43, a former wheat farmer in the northern province of Hebei, who now works as a night watchman at a factory. “All my life I’ve worked with my hands in the fields; do I have the educational level to keep up with the city people?”

China has long been home to both some of the world’s tiniest villages and its most congested, polluted examples of urban sprawl. The ultimate goal of the government’s modernization plan is to fully integrate 70 percent of the country’s population, or roughly 900 million people, into city living by 2025. Currently, only half that number are.

The building frenzy is on display in places like Liaocheng, which grew up as an entrepôt for local wheat farmers in the North China Plain. It is now ringed by scores of 20-story towers housing now-landless farmers who have been thrust into city life. Many are giddy at their new lives — they received the apartments free, plus tens of thousands of dollars for their land — but others are uncertain about what they will do when the money runs out.

Aggressive state spending is planned on new roads, hospitals, schools, community centers — which could cost upward of $600 billion a year, according to economists’ estimates. In addition, vast sums will be needed to pay for the education, health care and pensions of the ex-farmers.

While the economic fortunes of many have improved in the mass move to cities, unemployment and other social woes have also followed the enormous dislocation. Some young people feel lucky to have jobs that pay survival wages of about $150 a month; others wile away their days in pool halls and video-game arcades.

Top-down efforts to quickly transform entire societies have often come to grief, and urbanization has already proven one of the most wrenching changes in China’s 35 years of economic transition. Land disputes account for thousands of protests each year, including dozens of cases in recent years in which people have set themselves aflame rather than relocate.

This case study applies the theoretical concepts of frame and framing processes to identify and describe the diagnostic and prognostic frames for water sustainability expressed through an environmental decision support system. The research examines the development of WaterSim, a computer simulation model of water supply and demand in central Arizona. Qualitative data were generated through semistructured individual and group interviews, participant observations, and document analysis. The analysis identified a diagnostic frame defining the water sustainability problem as uncertain and long-term water supply shortage caused by prolonged drought, climate change impacts, and population growth. The prognostic frame for water sustainability defined the solutions to be urban residential water demand management, retirement of agricultural lands, and conversion of agricultural water to municipal uses to achieve safe yield of groundwater. The results of the study are discussed in terms of implications for decision support systems (DSS) design.

On June 10, 2013, Dave White, DCDC co-director and Senior Sustainability Scientist with the Global Institute of Sustainability and an ASU contingent, had the unique opportunity to travel to Tec de Monterrey in Monterrey, Mexico to participate in an exchange program focused on sustainability education.

Dave presented the sustainability research, education, and community and institutional outreach efforts conducted by DCDC with an emphasis on two key aspects.

First, the ongoing research and stakeholder outreach project which involves faculty researchers from both ASU and Tec. This project, informally called the Water Innovation Consortium, involves stakeholder engagement, social science, hydrology, and integrated decision support and was funded by the two universities along with Inter-American Development Bank and FEMSA Foundation.

Second, Dave also met with colleagues from Tec taking the opportunity to learn about their approach to sustainability education with the aim of improving our related efforts at ASU. 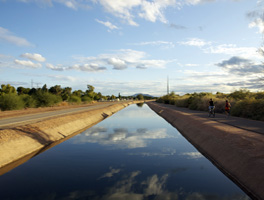 Phoenix, where water consumption is down from 250 daily gallons a person in 1990, does not have rebate programs. “It costs all the taxpayers money if you do that kind of thing,” said its deputy water services director, Brandy Kelso.

“I don’t want to mean that we don’t do conservation,” Ms. Kelso added. “We just approach it differently.”

“You may want to plant begonias,” Tamara Swanson, the development’s general manager, recalled having told prospective buyers, “but they wouldn’t do well here anyway.”

But is green in the desert a bad thing? Not necessarily. Dave D. White, a director of the National Science Foundation’s Decision Center for a Desert City, which studies water management decisions in central Arizona, said grass “cools off the landscape” and trees provide shade.

“There’s a need to use water to make our community livable, but in an intelligent way that thinks about long-term sustainability,” he said. “Because there’s no new supply out there.”