Congratulations to DCDC researcher, Enrique Vivoni, who was awarded a Leopold Leadership Fellowship! 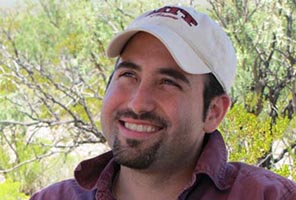 He becomes one of 20 Leopold Leadership Fellows for 2015 selected for their outstanding scientific qualifications, demonstrated leadership ability, and strong interest in sharing their knowledge beyond traditional academic audiences.

The Fellows will receive two weeks of intensive communication and leadership training in how to deliver information about their research to journalists, policymakers, business leaders and the public.

Vivoni is an associate professor in the School of Earth and Space Exploration and the School of Sustainable Engineering and the Built Environment, one of ASU’s Ira A. Fulton Schools of Engineering. He is internationally recognized in the fields of distributed hydrologic modeling, ecohydrology of semi-arid regions, North American monsoon studies and integration of engineering tools for advancing hydrologic science.

Water in the southwestern United States and northern Mexico is a contentious issue that traverses disciplinary boundaries. Vivoni’s research activities focus on the intersection of hydrology and its allied disciplines – ecology, meteorology and geomorphology – for improving understanding of water resources in this region.

A hallmark of his research achievements has been the collaborative studies of the shared water resources between the U.S. and Mexico.

“I am honored to be chosen as a Leopold Fellow and I look forward to serving as a focal point for water resources issues in the southwestern U.S. and northern Mexico,” Vivoni said. “The leadership skills developed through the Leopold Leadership program will be useful for addressing societal needs related to water resources sustainability.”

The program was founded in 1998 to fill a critical gap in environmental decision-making: providing the best scientific knowledge to government, nonprofit and business leaders, and the public, to further the development of sustainable policies and practices.

The list of 2015 Fellows is below, and more information about the program is available at Leopold Leadership.

Following a national search, natural resource expert and Audubon leader Sarah Porter has been named the inaugural director of the new Kyl Center for Water Policy at Morrison Institute.

“I am so excited to join the new center and help it succeed in finding collaborative solutions to address our state’s water challenges,” said Porter, who had been with the Audubon Arizona since 2006, including as executive director since 2010.

She will begin her new job at Morrison Institute for Public Policy on Jan. 20.

“We couldn’t be more pleased with having Sarah take charge of the Kyl Center as Arizona seeks new and innovative ways and strategies to settle water claims, develop sound water policy through consensus and better educate the general public about water resources and choices,” said Thom Reilly, director of Morrison Institute for Public Policy at Arizona State University.

Porter has a broad understanding of both Arizona and regional water issues, having directed Audubon’s Western Rivers project, a multi-state initiative to raise awareness of the challenges to Colorado River sustainability, as well as protecting and restoring flows for critical habitats and communities.

The Kyl Center, named after retired U.S. Sen. Jon Kyl in recognition of his statesmanship and continued leadership on water issues, was officially launched in November after a $1 million gift from the Morrison family. The Kyl Center is housed at Morrison Institute, which is part of the ASU College of Public Service and Community Solutions.

Kyl, who is actively involved in the center, including the selection process for the director post, said he was pleased by the choice of Porter.

“I was very impressed by the quality of all the candidates who expressed interest in the position, and particularly impressed by Sarah’s credentials, energy and dedication to collaboration – all of which are needed in making the center the success we all want and need it to be,” Kyl said.

Morrison Institute last month announced the addition of two senior research fellows to help with the research component of the Kyl Center for Water Policy: Kathleen Ferris, executive director of the Arizona Municipal Water Users Association; and Rhett B. Larson, an associate professor of law in the Sandra Day O’Connor College of Law at ASU. Both are attorneys.

Porter also is an attorney, having graduated from Harvard University with a bachelor’s degree and obtaining her juris doctor from Arizona State University (ranking third in her class). She clerked for federal appellate Judge William Canby and was a litigator for Brown & Bain; Coppersmith Gordon Schermer Owens & Nelson, PLC; and Osborn Maledon PA.

She said she left her law career in 2006 for Audubon because she wanted to contribute to a collaborative effort to address Arizona’s natural resource challenges. She will now dedicate that focus to the Kyl Center.