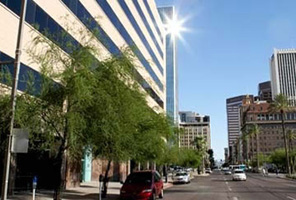 Check out these recent articles regarding the science policy interface in Nature and The Guardian.

Policy: Twenty tips for interpreting scientific claims, by William J. Sutherland, David Spiegelhalter, and Mark Burgman. Published November 20,2013. Calls for the closer integration of science in political decision-making have been commonplace for decades. However, there are serious problems in the application of science to policy — from energy to health and environment to education.This list will help non-scientists to interrogate advisers and to grasp the limitations of evidence.

Also, in response to the above article: 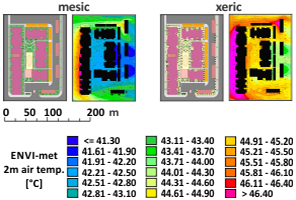 This study investigates the impact of urban form and landscaping type on the mid-afternoon microclimate in semi-arid Phoenix, Arizona. The goal is to find effective urban form and design strategies to ameliorate temperatures during the summer months. We simulated near-ground air temperatures for typical residential neighborhoods in Phoenix using the three-dimensional microclimate model ENVI-met. The model was validated using weather observations from the North Desert Village (NDV) landscape experiment, located on the Arizona State University’s Polytechnic campus. The NDV is an ideal site to determine the model’s input parameters, since it is a controlled environment recreating three prevailing residential landscape types in the Phoenix metropolitan area (mesic, oasis, and xeric). After validation, we designed five neighborhoods with different urban forms that represent a realistic cross-section of typical residential neighborhoods in Phoenix. The scenarios follow the Local Climate Zone (LCZ) classification scheme after Stewart and Oke. We then combined the neighborhoods with three landscape designs and, using ENVI-met, simulated microclimate conditions for these neighborhoods for a typical summer day. Results were analyzed in terms of mid-afternoon air temperature distribution and variation, ventilation, surface temperatures, and shading. Findings show that advection is important for the distribution of withindesign temperatures and that spatial differences in cooling are strongly related to solar radiation and local shading patterns. In mid-afternoon, dense urban forms can create local cool islands. Our approach suggests that the LCZ concept is useful for planning and design purposes. 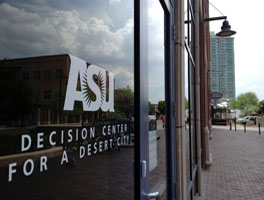 Funded by the National Science Foundation (NSF) and organized under ASU’s Global Institute of Sustainability, DCDC is focused on water sustainability, urban climate adaptation, and decision-making under uncertainty. The center pursues research, in close collaboration with stakeholders, to create a more sustainable future. Research and modeling efforts analyze interacting factors such as population growth and economic development, climate change and variability, water supplies and demands, and governance to inform water management and other environmental decisions among diverse stakeholders. 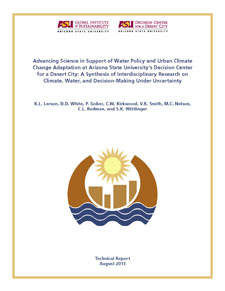 “This synthesis of DCDC findings was essential for us to back up and say, ‘What have we learned from it all, and where are we going next?’” says Kelli Larson, the report’s lead author and a co-principal investigator at DCDC.

Since its founding, DCDC participants have published over 340 peer-reviewed journal articles and book chapters and supported 69 graduate students who have authored 18 doctoral dissertations and 17 master’s theses. In addition, more than 70 undergraduate students have been involved in DCDC’s research through the Internship for Science-Practice Integration, the Community of Undergraduate Scholars program, and other research assistantships.

“The most challenging and complex sustainability problems facing society today—like climate change—require a new approach to science,” says Dave White, DCDC principal investigator and co-director. “We must combine interdisciplinary science within the university with meaningful stakeholder engagement. This ‘transdisciplinary’ approach is reflected in the report, which synthesizes DCDC’s most important findings across a diverse range of disciplines and identifies the most pressing new issues.”

The report recaps the history and role of DCDC within scientific and policy dialogue and then plunges into the research results that have been produced over the years. A major theme is the challenge for cities to provide and maintain secure and reliable water supplies despite an uncertain future that will likely include warming temperatures, reduced precipitation, and more extreme weather events such as droughts, fires, and floods.

“Key findings across DCDC research have revealed uneven spatial and social vulnerabilities to water scarcity and other risks, as well as inevitable tradeoffs and uncertainties in decision-making,” Larson says. “To cope with the complexities of environmental change, collaborations, and social learning across different actors—such as scientists and policy makers, water managers and land use planners—is essential for urban sustainability.”

The report covers topics ranging from climate models used to predict how climate change affects water supplies and demands to analyses on risk perceptions and policy attitudes regarding water resource sustainability. DCDC participants have also contributed substantially to the ASU portfolio of research into climate dynamics including the potential for climate change scenarios to affect regional water resources, in addition to localized urban heat island (UHI) effects and especially their impact on water resources. This work has involved analyzing how urban land-use and land-cover patterns interact with climatic factors to affect water demands.

One of the signature products of DCDC, WaterSim, is described in detail in the report. WaterSim is a systems dynamics model used by researchers, educators, and decision-makers to explore scenarios of climate change, population growth, and how policy choices could alter water supply and demand in central Arizona.

Since its inception, DCDC has served as a type of “boundary organization” designed to bring together academic researchers with diverse stakeholders to ensure that science is not only credible, but also relevant for decision-making. In this role, DCDC has engaged with its partners through educational activities including joint research projects and collaborative workshops. Many of these activities are highlighted throughout the report.