Water management decision makers’ evaluations of uncertainty in a decision support system: the case of WaterSim in the Decision Theater 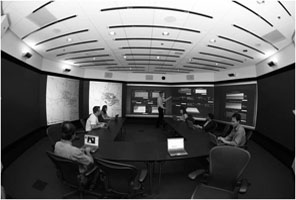 Download the article from the Journal of Environmental Planning and Management

Moving water from one area of Arizona to another has the potential to create controversies, especially if the area from which the water is being transferred has existing water uses and economies built on that water supply.

In the Arizona Department of Water Resources report, “Arizona’s Next Century: A Strategic Vision for Water Supply Sustainability”, it is suggested that in-state water transfers will play a strategic role in Arizona’s sustainable water future. Yet, the report suggests that a comprehensive analysis of water transfers is needed to better understand their role in our water future and their secondary benefits and impacts.

In this Water/Climate Briefing, our panelists will use Yuma County as a case study to begin identifying the issues about water transfers that we need to better understand and what type of further dialogue and research is needed. 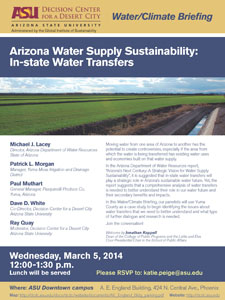 Also note that the A.E. England building is located next to a the Central Station Transfer station which features the Van Buren light rail stop, several bus routes (including express buses and the DASH), and bike lockers. For more information, please click here. For those coming from ASU’s main campus in Tempe, there is an additional option to take the FREE intercampus shuttle that leaves every half hour (on the hour and on the half hour) and deposits you across the street from the A.E. England building, make sure you take the MAROON route.

In an attempt to inform policy conversations around wastewater use in Arizona, Arizona State University’s Decision Center for a Desert City (DCDC) this week released a new technical report. The report, Water Reuse in Central Arizona was authored by Ariane Middel, Ray Quay, and Dave White and explores issues critical to water reuse, along with challenges and opportunities for the future. 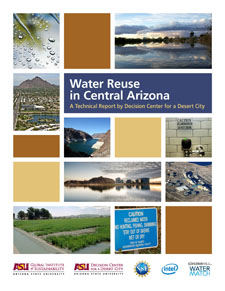 Covering topics including existing and projected wastewater supply and demand, potential for increased competition and costs, the role of public perceptions, and industrial perspectives, the report highlights issues vital to the water sustainability of Arizona and presents a framework to address public policy issues.

“Several recent reports and commissions have pointed to increased water reuse as an important strategy to address projected water supply deficits resulting from droughts and anticipated climate change impacts” said Dave White, a co-author of the report and Co-Director of the Decision Center for a Desert City at ASU.

“While we share this common goal, this report demonstrates, however, that effluent reuse is certainly not a silver bullet to water sustainability. Many issues remain that must be addressed as we move forward. There are technical, economic, environmental, cultural, legal, and political dimensions.”

The publication is the result of collaboration between Arizona State University, Intel Corporation, and CH2M Hill’s WaterMatch.

“Sustainable water management is a key focus at Intel,” said Gary Niekerk, director of Corporate Citizenship at Intel. “We created the collaboration with CH2M HILL‘s WaterMatch, ASU’s Global Institute of Sustainability and ASU’s Decision Center for a Desert City to increase awareness of water sustainability issues in our local community.”

Once thought of as just a waste product, communities across the United States are increasingly considering wastewater a valuable resource. In these communities, the effluent from wastewater treatment plants can relieve the stress on overstretched water supplies by replacing other sources for non-potable, or sometimes even potable, uses.

Effluent is currently used in Arizona for urban and agricultural irrigation, industrial purposes, and for recharging groundwater aquifers. According to the new report, effluent reuse in the Phoenix Active Management Area may be as high as 82 percent.

A majority of effluent is used to cool Arizona Public Service’s Palo Verde Nuclear Generating Station. Some of these processes use effluent that has been treated for higher quality, resulting in reclaimed water. Reclaimed water is used to water parks and golf courses, as well as non-edible agricultural irrigation (i.e. for cotton).

This report highlights the current use of effluent as a key water conservation strategy for Arizona’s Sun Corridor—the combined metropolitan areas of Phoenix and Tucson. Though beneficial for helping curb the demand for water in Central Phoenix, effluent offers many challenges for future water managers and decision makers.

A key challenge for producers of effluent will be cost. Wastewater treatment is currently the largest consumer of energy in Central Phoenix. In the future, this process will become even more expensive as wastewater treatment becomes more sophisticated to remove the brine (salt) and pharmaceuticals from water. A key challenge for effluent consumers will be competition.

Ray Quay suggests that, “Here in central Arizona, as in southern California and northern Florida, most effluent is already being reused. As the price of water supply goes up, so will the value of effluent. In an open market this may put it economically out of reach of current effluent users, who may find ground water cheaper to use.”

Thus the key to keeping water management sustainable is to continue to keep effluent cost-effective in comparison to the cost of pumping groundwater.

In addition to the authors, contributors to the report include Rob Melnick, Executive Dean and John Sabo, Director of Research, each from the ASU Global Institute of Sustainability, along with DCDC staff Sally Wittlinger and Liz Marquez and student interns Rud Moe and Saad Ahmed.

The review is based in part on a series of interviews and expert reviews by representatives from public, private, and nonprofit agencies.