Dynamics of Water in Urban Ecosystems: Effluent for the Environment

The reuse of effluent, otherwise known as reclaimed or recycled water, is becoming more and more of a commodity as water resource manager’s deal with tightening water budgets. It has many uses including groundwater recharge, cooling for industrial uses and irrigation for crops, public parks and golf courses. Now, it is even being considered as a drinking water supply in places using groundwater recharge/recovery or “toilet-to-tap” technology.

With its many beneficial uses possibly one of the most important is its utilization to support natural environments. Across the country, water that was once considered a nuisance is now being sought after for environmental stream flows and projects such as the Tres Rios wetlands in Phoenix and the Sweetwater Wetlands in Tucson, both of which create wildlife habitat using effluent.

Join us in a discussion on November 14, 2012, focused on the collaboration, competition, and policy implications of the use of “effluent for the environment.”

Lunch will be served. Please RSVP to: Sarah.Jones.2@asu.edu 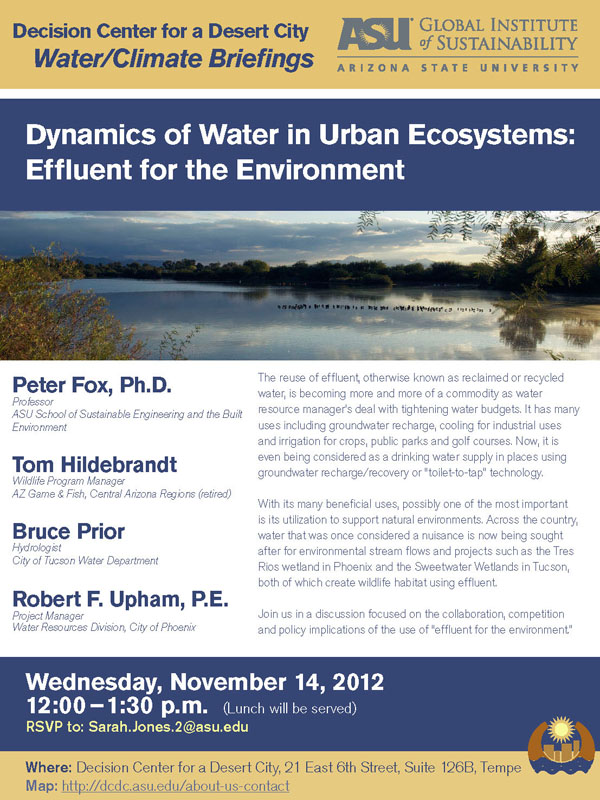 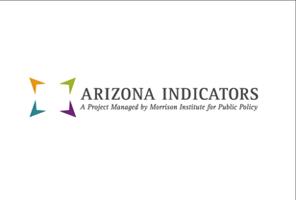 This Policy Points provides a clear, succinct overview of the status of Arizona’s water supply and what the current drought really means for water availability. Both the effect of climate change on our future water supply and the size of the population that will need to share in that supply are uncertainties that water planners must consider when making decisions regarding our future. We have options, but we have to be sure that we use water efficiently to meet our urban, agricultural, and environmental needs.

Read the entire Policy Points at the Arizona Indicators .

Decision Center for a Desert City, at the request of the ASU President’s Office, has been contributing to the Sustainability indicators since the inception of the project. These indicators currently are housed in four categories: Air Quality, Water Quality, Urban Heat Island, and Energy. DCDC also now contributes to the three sustainability-related indicator categories on the Transportation tab, Travel Time and Congestion, Commuters’ Mode of Travel, and Public Transportation. Data for these indicators are collected from various public sources and are presented in a way that makes them accessible to the general public.

For more information about DCDC’s involvement in the Arizona Indicators project, visit the DCDC website. 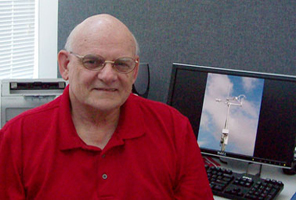 Anthony J. Brazel, ASU professor emeritus, has received the Helmet E. Landsberg Award for 2013 from the American Meteorological Society’s Board on the Urban Environment. The AMS is this country’s primary professional society for atmospheric scientists.

“Tony’s recognition by the American Meteorological Society highlights the prominent recognition his work has garnered across a spectrum of geophysical disciplines,” said Randall Cerveny, ASU President’s Professor and climatologist in the School of Geographical Sciences and Urban Planning. “His research papers, with topics that include everything from Phoenix urban dust storms to the intricacies of urban climate energy fluxes, are some of the most highly regarded works by geographical climatologists.”

This award is named after Helmut E. Landsberg, a climatologist and Presidential Medal of Science winner who modernized how climate data are used to help solve societal problems. Among other accomplishments, Landsberg made ground-breaking connections between climate and urbanization by helping advance the study of urban climates from a descriptive study to one of physical understanding. In selecting Brazel for the award, the society notes the ASU professor’s “fundamental contributions to the field of urban climatology, especially those related to understanding urban heat islands in desert environments.”

Brazel’s work in desert urban climatology began soon after he became director of ASU’s Laboratory of Climatology and governor-designated Arizona State Climatologist in 1979. “With new realizations of climate change at this time, there arose many applied and fundamental research opportunities for colleagues at ASU to investigate the role of urbanization and climate change” said Brazel. “The “research laboratory” was right in front of us – Phoenix, Ariz.”

As state climatologist, a position he held until 1999, Brazel and his colleagues worked closely with stakeholders ranging from the National Weather Service, to the Arizona Department of Environmental Quality, water and energy provider Salt River Project (SRP), and city and county organizations. In the 1980’s, Brazel helped establish a partnership between SRP, ASU, and the State Climate Office that focused on improving short-term weather forecasting models applied to urban areas. Collaborations such as these catalyzed urban climate research, rooted in Phoenix-area and Arizona climate issues, but with implications for the understanding of urban climate globally.

“A simple literature search shows nearly twice as many peer-reviewed research articles dealing with Phoenix’s urban heat island as there are for either New York City or Houston,” comments Winston Chow, a research fellow in ASU’s Department of Engineering, College of Technology and Innovation, with a concurrent appointment in the National University of Singapore’s Department of Geography. “This flourishing of research in Phoenix is in large part due to Brazel’s success in advancing partnerships between ASU and local stakeholders.”

“Another important aspect of his work,” Chow adds, “is his dedication to geographical fieldwork. Tony has trained numerous students to value the importance of its proper practice, which is key to excellent research.”

“Brazel’s work in urban climatology – particularly in desert urban climatology – over the last four decades has, quite literally, shaped the fundamental concepts and themes for current research into this increasingly vital and important scientific and social topic,” observes Luc Anselin, Regents’ Professor and School of Geographical Sciences director

Brazel is an emeritus professor in the School of Geographical Sciences and Urban Planning, an academic unit of the College of Liberal Arts and Sciences. In 2010, he received the Association of American Geographers Climate Specialty Group Lifetime Achievement Award. Brazel remains as a senior sustainability scholar with ASU’s Global Institute of Sustainability, is editor of the Journal of the Arizona-Nevada Academy of Science, and serves on the Editorial Board of the Annals of the Association of American Geographers.

Brazel will receive the Landsberg Award at the society’s national meeting, which takes place in Austin, Texas, Jan. 6-10, 2013. 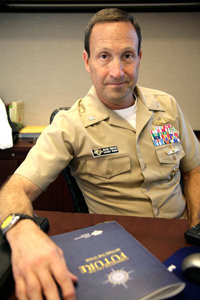 On Thursday, October 25, 2012, Captain Wayne Porter, USN, Chair, Systemic Strategy and Complexity at the Naval Postgraduate School, will present the first Wrigley Lecture Series of the 2012-2013 academic year. He will be discussing his piece, “A National Strategic Narrative,” co-authored with Colonel Mark Mykleby. The narrative argues for a need of a sustainability context when protecting our nation’s prosperity and security. It is now time to move the nation from a Cold War strategy of containment to a strategy of sustainability designed to address our enduring interests in a dynamic environment. 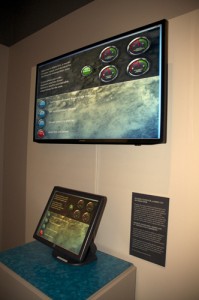 Water is an essential resource for human settlement. Regardless of the climate or economy, if there is not an adequate supply of water to meet the water demands of a community, the community cannot be sustainable. Thus managing water supply and demand so that demand does not exceed supply will be an essential component of any communities plan for sustainability. Such management, referred to as water resources management, in urbanized regions can be very complicated. The systems used to collect water from multiple sources, treat it, deliver it to community residents, collect the wastewater, treat it, and safely dispose or reuse it are typically complex highly regulated systems often operated by multiple agencies over different geographies that can span hundreds of miles.

Management of such complex systems is further complicated by the future uncertainty in the factors that affect water supply and demand. Such uncertainties include: possible changes in the future growth or decline of a community and the behavior of its residents to use water, possible change is future of climate conditions of the community, and the ability of government and private institutions to respond to these changes in a manner that maintains a balance between water supply and demand. 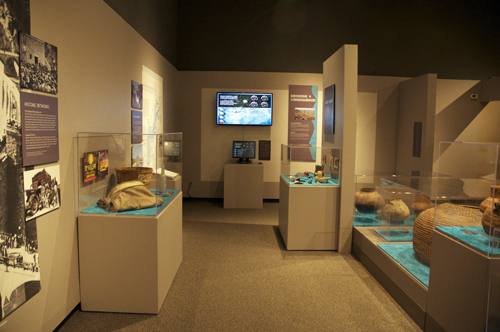 This collaboration between Pueblo Grande and Arizona State University brings the new exhibit, “Living in the Desert: Decisions and Consequences”, to the Changing Gallery. The exhibit explores trade-offs made in the quest for desert sustainability in ancient, historic, and modern times. It includes a focus on water use from the Hohokam canal system through the allocation of Colorado River water today. The population of the southwestern United States can learn from the experiences of the Hohokam 1000 years ago.

To better understand how these uncertainties affect the complex tasks of water resources management, the Decision Center for a Desert City has been using a water and supply demand model, called WaterSim. The WaterSim kiosk offers a very basic and simplified version of our WaterSim model using a touchscreen device. This model has been implemented for the Central Arizona region and used primarily in four ways. 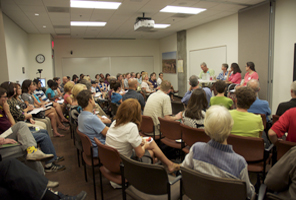 Currently, our Water/Climate Briefing from September 5, 2012 on Dynamics of Water in an Urban Ecosystem is available.