It is generally accepted in the scientific community that the world is undergoing a significant change in its climate. The issues and problems of the science that seeks to understand the earth’s climate, and how it is changing, have a significant mathematical dimension. The Mathematics and Climate Research Network (MCRN) is a virtual organization of leading researchers in mathematics and geosciences whose mission is to establish a new area of applied mathematics tailored to the needs of climate research. 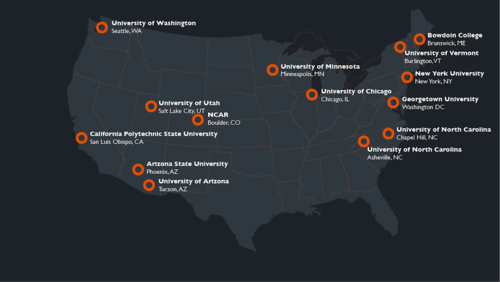 The network consists of researchers at “nodes” across the US, together with several collaborating government and university labs and centers in the US and beyond. Network researchers have a collective expertise that cuts across the relevant areas of applied mathematics and climate science. They will collaboratively lead a group of postdoctoral research fellows, graduate and undergraduate students to create a cadre of strong mathematicians with the interdisciplinary expertise required to analyze problems that have their origin in climate issues.

MCRN is funded by an award from the National Science Foundation’s Division of Mathematical Sciences, and is administered through the Renaissance Computing Institute.