Concerns for water in the West are reflected in recent articles in the news such as Las Vegas water chief seeks disaster aid for Colorado River drought via Las Vegas Review-Journal; Arid Southwest Cities’ Plea: Lose the Lawn via The New York Times; New Mexico is the driest of the dry via the Los Angeles Times. 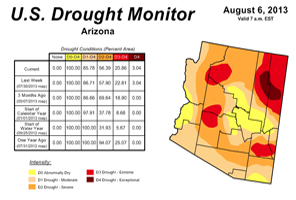 Tracking drought blends science and art. No single definition of drought works for all circumstances, so people rely on drought indices to detect and measure droughts. But no single index works under all circumstances, either. That’s why we need the Drought Monitor, a synthesis of multiple indices and impacts, that represents a consensus of federal and academic scientists. The product will be refined over time as find ways to make it better reflect the needs of decision-makers and others who use the information.

The U.S. Drought Monitor is produced in partnership between the National Drought Mitigation Center at the University of Nebraska-Lincoln, the United States Department of Agriculture, and the National Oceanic and Atmospheric Administration. Map courtesy of NDMC-UNL.