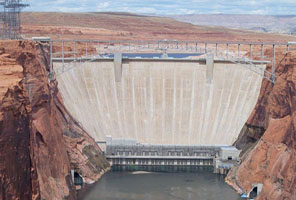 Arizona Republic environmental reporter Brandon Loomis investigates the wicked problem of keeping or destroying Glen Canyon Dam, a decision that seems to have no positive outcomes. Water managers, some scientists, and activists would like to see the dam removed in order to drain Lake Powell and feed a drought-stricken Lake Mead, a water source for major cities including Las Vegas and Phoenix. Draining Lake Powell would also return Glen Canyon to its former, natural glory.

However, some suggest negative consequences if the dam is to be removed. ASU’s Decision Center for a Desert City co-director and senior sustainability scientist Dave White says removing Glen Canyon Dam would rid thirsty cities of a captured and stored water supply.

“(Dam removal) would be fairly catastrophic,” White says. “We have too much demand on an annual basis to be met by the natural in-flow of the river.”

He says if anything, Glen Canyon Dam would be re-designed, improved, and repaired.

Continue reading the article at AZCentral.com.