Prepared by the Center for Integrated Solutions to Climate Challenges at Arizona State University in collaboration with the Climate Assessment for the Southwest (CLIMAS) at the University of Arizona and Decision Center for a Desert City (DCDC).

The City of Phoenix’s Cool Urban Spaces Report (2014) investigated the impact of the Phoenix Cool Roofs and Tree and Shade Master Plan initiatives on the city. The study evaluated how these heat mitigation efforts affect microclimates and human thermal comfort in the Phoenix metropolitan area. These findings are especially relevant as rapid and extensive urbanization has led to an urban heat island (UHI) effect that has increased steadily at approximately 0.9°F per decade. 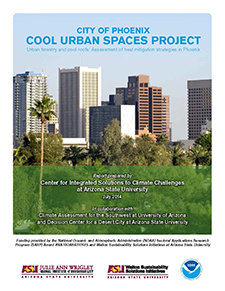 The city’s questions guiding this research were:

The impacts of cool roofs and trees on near-ground air temperatures were modeled through 54 scenarios for a typical residential neighborhood in Phoenix. We ran the model for a combination of three treeplanting scenarios (no trees, current canopy cover and 2030 canopy goal) and three landscaping scenarios (mesic, oasis and xeric) with regular roofs and cool roofs under current climate conditions and two climate change projections.

Two significant results of the tree and shade initiative are: (1)increasing tree canopy cover to 25% leads to an additional temperature reduction of 4.3°F, which is a total cooling benefit of 7.9°F as compared to a bare neighborhood, and 2) switching landscaping from xeric to oasis, i.e., adding grass patches to residential backyards, reduces average neighborhood temperatures by 0.4°F to 0.5°F.

The scenario with the lowest air temperatures is the residential neighborhood with mesic landscaping, 25% tree canopy cover and cool roofs under current climate conditions with an average neighborhood temperature of 99.5°F. In contrast, the xeric neighborhood with no tree cover and regular roofs under the high-emissions climate change scenario is the hottest. This indicates that the combination of increased tree canopy cover and cool roofs does lower temperatures as well as reduce the demand for air conditioning, thereby reducing anthropogenic heat. However, trees and cool roofs are only part of the solution and need to be included in a broader, more comprehensive mitigation and adaptation plan.

Across all climate and tree scenarios, the effect of cool roofs alone on local daytime temperatures is relatively low. Air temperature reduction only amounts to 0.5°F in the neighborhood. Regarding the city’s cool roofs initiative, results show little benefit for extending this project to commercial and residential properties based on its cooling impacts alone.

Our research thus far indicates that there is no simple solution to mitigating the UHI, but a complex balance of strategies will be necessary so that efforts to lower the daytime temperatures do not increase nighttime temperatures or shift UHI impacts to more vulnerable populations.

The Center for Integrated Solutions to Climate Challenges and Decision Center for a Desert City (DCDC) at ASU, along with Climate Assessment for the Southwest (CLIMAS) at the University of Arizona, through a NOAA-funded grant, convened a workshop with urban managers and practitioners in October 2012. One goal of the workshop was to provide useful, state-of-the-art climate knowledge to encourage the use of climate science in longrange decision processes. Another was to provide opportunities for working with urban managers and planners to develop tangible products and/or processes that will enable the incorporation of this information into their unique planning documents and policies. Attendees were asked to develop project proposals for tractable, city-specific adaptation projects on behalf of their municipality. Three proposals were chosen for funding: Tucson, Flagstaff and Phoenix. The City of Phoenix asked for support in assessing the impact of their urban forestry and cool roofs initiatives on projected heat increases and the urban heat island (UHI).

In Phoenix, rapid and extensive urbanization has led to an UHI in the metropolitan area that has increased steadily at approximately 0.9°F (0.5°C) per decade. A time-trend analysis of Phoenix Sky Harbor air temperatures showed nighttime temperature differences between rural and urban areas of up to 11°F (6°C) in the summer (Brazel et al., 2000). Winter mobile transect observations in Phoenix found a UHI intensity of 14°F (8°C) (Sun et al., 2009), and a study in the spring observed an average UHI intensity of 17°F to 23°F (9.4°C to 12.9°C) (Hawkins et al., 2004). Discussions with Philip McNeely, the city’s Environmental Program Manager; Richard Adkins, Phoenix Parks and Recreation Department’s Forestry Supervisor; and a number of ASU researchers provided insight into the current activities being undertaken by the city to mitigate heat. Among these were their green building and urban forestry initiatives.

The stakeholder questions coming from the activities guiding this research were:

This study used micro-scale modeling, hourly meteorological observations and a research synthesis workshop with UHI experts from ASU to help inform the City of Phoenix’s green building and urban forestry initiatives. Initial results were presented to the City of Phoenix in late 2013.