In the Southwestern United States, the agricultural sector has historically been the largest single demand for water and energy. 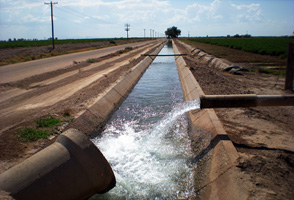 Agriculture is vulnerable to climate change because of the direct dependence of farm production on rainfall, streamflow, and snowpack. In central Arizona and elsewhere in the West, irrigation and large-scale water storage and conveyance infrastructure (e.g., dams, canals) introduce additional complexity to the policy context.

While irrigated agriculture in central Arizona has been protected from year-to-year variability in precipitation through large investments in water infrastructure—such as the Hoover and Roosevelt dams and the Central Arizona Project aqueduct—the prospect of long-term shortage conditions on the Colorado River, or prolonged local drought, throw the future security of the agricultural water supply into question.

Farmers’ choices are affected not only by water rights and access, but also by increased pumping costs due to rising energy prices and insecurity of land tenure. Many farmers are now disincentivized from making irrigation efficiency improvements because they hold short-term leases on land owned by urban developers.

In the Phoenix metro area, a slowdown in the urban economy (especially housing construction) happened at the same time as an upsurge in farm commodity prices, shifting opportunity for expansion and associated water demand back to the agricultural sector.

Global increases in commodity prices underscore a growing concern that farmland is being lost while global food and fiber demands are still increasing.

Although market signals are critical in central Arizona farmers’ decisions, uncertainties and interdependencies potentially impede planning and responsiveness in the agricultural sector.